Paul O’Connell’s big match to Emily over in France 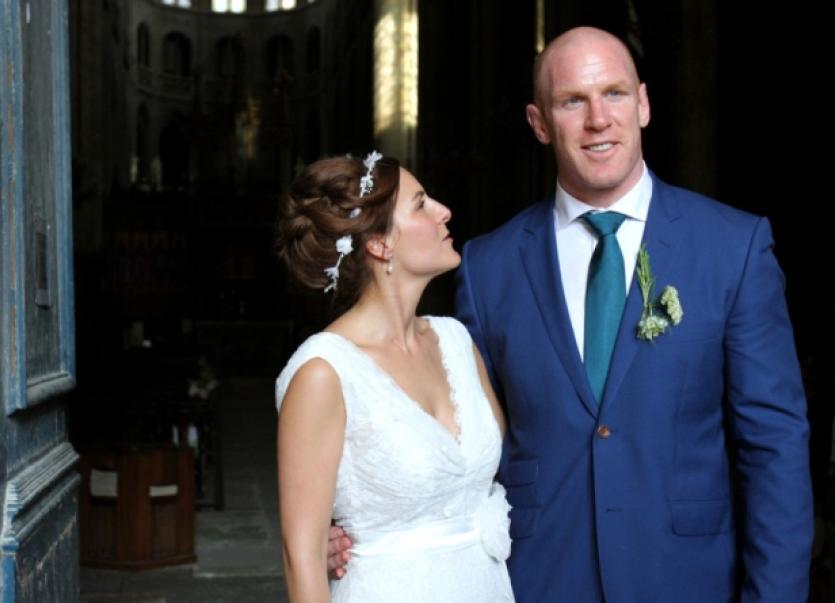 The towering rugby legend was composed and relaxed during the biggest match of his life, marrying Emily in front of nearly 200 guests in the Sainte Marie Cathedral in the small town of Auch, in Gascony on Saturday.

Shortly after 3pm, in front of a crowd made up mostly of close family and friends from Limerick, Paul and Emily were married by his uncle Fr Dan O’Connell, a priest based in the USA for many years.

Rugby supporters milled around the cathedral, which was open to the public, causing much amusement during the ceremony as fans and interested parties alike craned their necks for a look at the bride - wearing a stunning dress of white chantilly lace topped off with a headdress of white flowers and feathers - and Paul, wearing a dapper blue suit with tan shoes.

The couple’s son Paddy, 3, played a central role in the ceremony as a page boy, clutching a toy rabbit, while Paul’s niece Julie was a flower girl.

Emily arrived fashionably late to cheers in the centre of the small town, driven in a vintage Renault car along with Dad Pat. She was accompanied by bridesmaids, her sisters Stephanie and Danielle, and best friend, Lorraine Murray, with Mum Keave not far away from the former Laurel Hill girl.

Lions star Paul was backed up by his best man and brother Marcus and groomsmen Justin and Emily’s brother Paul, while parents Mick and Shelagh looked on with pride.

There was a smattering of rugby greats past and present in attendance - Alan Quinlan, Ronan O’Gara, David Wallace, Mick Galwey, Keith Earls, Barry Murphy, Donncha O’Callaghan, Jerry Flannery and Doug Howlett - as well as current Munster coach Rob Penney and businessman JP McManus and wife Noreen, who flew back to Geneva not long after the meal - but by and large it was close friends and family, with plenty of representation from Young Munster, Paul’s club, in attendance, including brothers Mike and Gearoid Prendergast and rugby legend Peter Clohessy.

After the service the guests were taken by bus to the 18th century Chateau Lartigolle estate in nearby Pessan.

After a drinks reception guests enjoyed a banquet style dinner of local produce in a cellar underneath the estate, where long tables seated 60-70 people each.

Intimate lighting lit the cavernous, 150 foot long semi-circular cellar, while guests dined on starters of prawn and fennel bisque, warm wild mushroom tartlets with a spit-roast as the centrepiece, billed as “incredible” by several guests who spoke to the Limerick Leader.

Afterwards a local French band entertained guests upstairs, with carpets put down as a dance floor.

The wine - a Prestigi Shiraz and Novi Chardonnay - was provided by the French vineyard that supplies the Wine Buff shops in Ireland, who have a store on Mallow Street in Limerick.

The wedding was described by various guests in attendance as “beautiful, quite French but very chilled out and classy”.

“Emily is very arty so there were some really nice touches to it, really good music,” said one guest of the Clarina girl.

“It was very relaxed, but that is Paul and Emily through and through. It was a brilliant wedding,” added another guest.