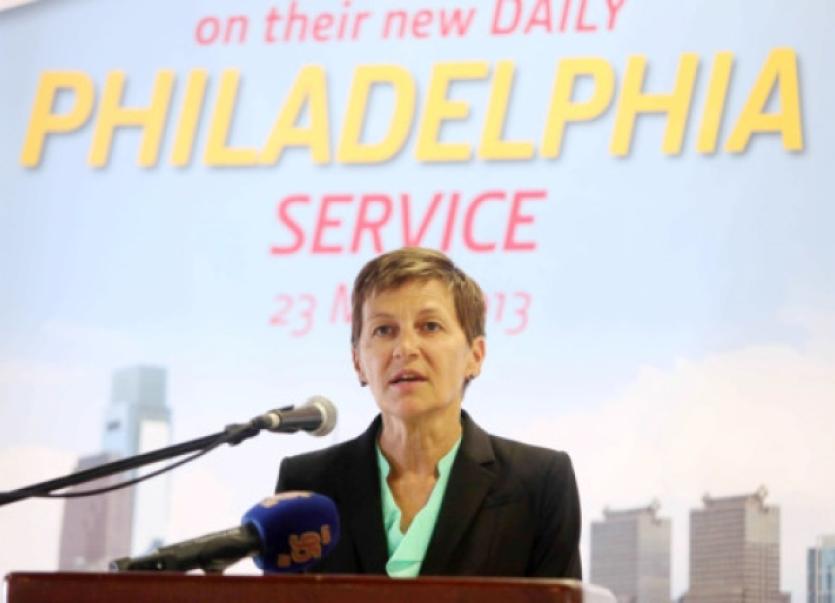 BOOKINGS on US Airways’ new seasonal service from Shannon to Philadelphia are “meeting or exceeding expectations”, a senior executive from the airline has said.

BOOKINGS on US Airways’ new seasonal service from Shannon to Philadelphia are “meeting or exceeding expectations”, a senior executive from the airline has said.

Flights last operated between Shannon and Philadelphia in 2009 but Suzanne Boda said the time was now opportune to relaunch the daily service which will run until September. Much had changed since US Airways last landed at Shannon. US customs and immigration preclearance has improved the customer experience; Shannon is under new management; and the airline is set to complete a merger with American Airlines that will create the world’s biggest airline.

“Obviously the global economy was in severe straits back in 2009. It definitely has stabilised and we are seeing really good bookings for this flight this summer so we are really pleased with the levels we are seeing,” said Ms Boda, senior vice-president, airport customer service, international and cargo.

The route will be plied by a 757 aircraft with around 180 seats and bookings to date were “meeting or exceeding expectations”, Ms Boda said.

Early indications are that almost 90% of the traffic is US originating, which Shannon Airport Authority chairman Rose Hynes said was a very encouraging statistic for the tourism industry in the west of Ireland.

Philadelphia, Ms Hynes noted, was where the founding fathers of the United States had signed the Declaration of Independence in 1776.

“In Shannon, we had our own declaration of independence from the DAA signed on January 1, 2013. So that’s an important link for us. Shannon is now an independent airport and the important message to go out from us is that we are very much open for business,” Ms Hynes said.

A cake in the shape of the Liberty Bell - one of Philadelphia’s main tourist attractions - was cut to mark the occasion with slices handed out to passengers on the inaugural flight.

While many of the passengers using the service may be Irish-Americans coming back to the old country, Ms Hynes said it was important for Shannon to win a service to what was a major US hub.

Ms Boda said passengers departing Shannon can get over 100 onward connections out of Philadelphia, both US domestic and on to Canada, Mexico and the Caribbean.

Shannon’s new chief executive officer Neil Pakey, said Ms Hynes, was determined to make a success of the new route and “build a strong base of business and leisure passengers” that could lead to further business with US Airways.

And John Hennessey-Niland, chargé d’affaires at the American Embassy in Dublin, said Shannon remained an important strategic partner for the US government.