Throttles at the ready for 2013 Circuit of Munster 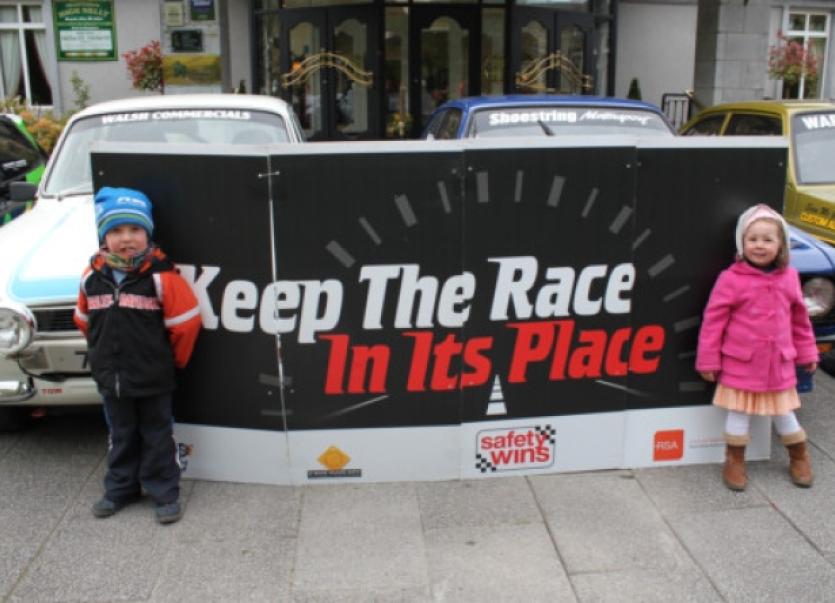 IN what is expected to be a thrilling spectator event, the 130 rally cars competing for laurels in the Circuit of Munster on Bank Holiday Monday, will finish their nine laps with a flourish at Limerick Racecourse.

IN what is expected to be a thrilling spectator event, the 130 rally cars competing for laurels in the Circuit of Munster on Bank Holiday Monday, will finish their nine laps with a flourish at Limerick Racecourse.

And while drivers are expected from every county in Ireland as well as from Britain, last year’s champion, Colm Murphy from Athea is favourite to lift the trophy again. But, according to informed sources, two other Limerick drivers, Ed O’Callaghan from Askeaton and Ed Synan from Shanagolden will most certainly be challenging Colm in what may well be a three-way Limerick contest.

But surprises come in motor sports, as in all sports. And as Limerick Motor Club chairman, Bill Fitzgerald, said, launching the event this Tuesday: “It will be a good day’s sport.”

“We are the oldest motor club in the country,” Mr Fitzgerald continued. “And the Circuit of Munster is the longest-running of these events; it was first run in 1949.”

Mr Fitzgerald, who has been involved in organising the circuit for two decades now, believes it is a good boost,and a money spinner, for the region.

“We have upwards of 1000 people involved between officials, stewards, drivers and so on. Add in the followers and you have a lot of people coming to Limerick, staying in the area.” Hotels and bed and breakfasts are booked out, in particular in the West Limerick area and the Woodlands House Hotel, which is a major sponsor, is the social hub for the event.

It is hard to calculate the number of spectators the circuit attracts but this year the club decided to make Limerick Racecourse their base and to begin and end the rally there. It is also a the venue for one of the circuit’s three stages, a short, spectator stage of 2.5km.

The other stages are over 16 km and will run Kilcornan-Curraghchase- Askeaton and then Pallaskenry –Beagh Castle- Kilcornan. Each driver will do three loops, each loop made up of all three  stages.

Mr Fitzgerald is confident the Limerick Racecourse venue will appeal to spectators. “It brings motor-sport to the people in a safe way,” he said. But he stressed that health and safety were of paramount importance throughout the circuit. Unfortunately, he said, rallying can be a dangerous sport and he instanced the two fatalities that occurred at a rally in Cavan last year.

It is crucial, he said, that people obey the instructions of rally stewards and officials and of the Garda. Roads will be closed for several hours on the Sunday of the rally.

The club has also organised a family fun day, with over 30 different attractions, which will run all day at Limerick Racecourse.

The Circuit of Munster is round three of the six round West Coast Championship.