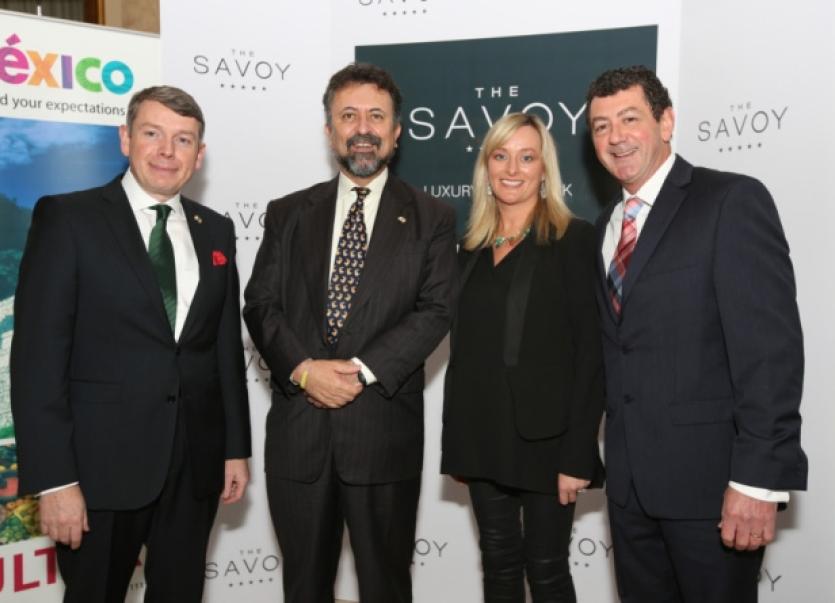 MANAGING director of the Savoy Hotel Group, Ronan Branigan, has been officially appointed Honorary Consul of Mexico by the Mexican government and the Ambassador of Mexico to Ireland.

MANAGING director of the Savoy Hotel Group, Ronan Branigan, has been officially appointed Honorary Consul of Mexico by the Mexican government and the Ambassador of Mexico to Ireland.

“Ronan is incredibly known and respected, as a person, as a human being and as a businessman. Obviously, every country wants a high profile of these representatives, no doubt,” said the Ambassador.

“But besides his strong background, personal and professional, it is clearly important to know that this gentleman knows Mexico, he’s connected with Mexico by many different ways,” he explained.

Mr Branigan said that he intends to utilise the benefits of the Wild Atlantic Way and hopes to see a direct flight established from Shannon Airport to Mexico in the near future.

“For the honorary consulate to be relevant and successful, I think you have to plug into the common ground. Ireland and Mexico are both very similar and very different places,” he said.

“Mexico is the most popular destination for Irish people, in Latin America. I would like for that to reciprocate back here in some fashion, be that through a direct flight to Shannon. The Ambassador recently announced a direct flight from Dublin to Cancun, which starts next June. This is a fantastic initiative.

“We look forward, in this region, to somebody announcing a direct flight from Shannon to Mexico; to Cancun or to Mexico City.”

The Ambassador said that he believed Mr Branigan will assist in Mexico developing its trade ties with Ireland, in order to help Mexico “get bigger and stronger”.