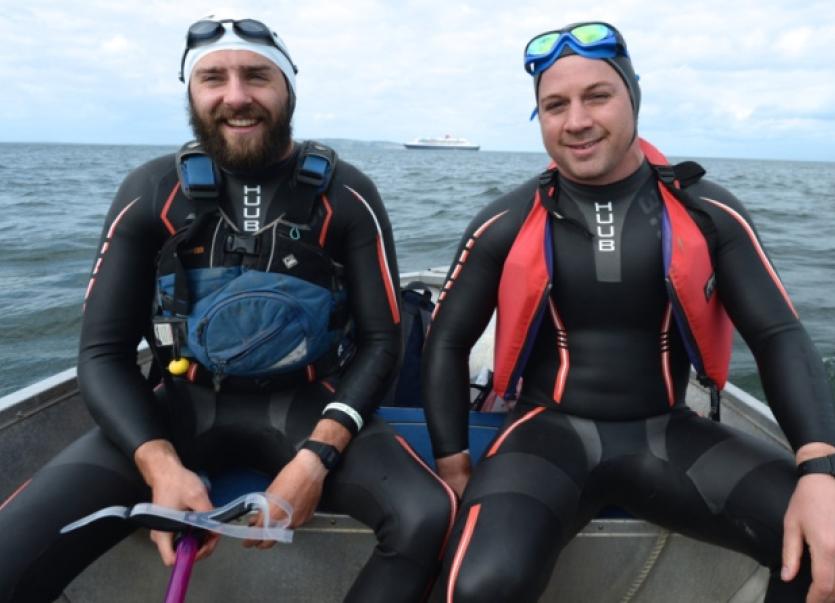 DESPITE admitting to being a less than expert swimmer, Limerick adventurer Maghnus Collins has set off on his latest expedition - an ‘unprecedented’ 1,600km swim around the entire island of Ireland.

DESPITE admitting to being a less than expert swimmer, Limerick adventurer Maghnus Collins has set off on his latest expedition - an ‘unprecedented’ 1,600km swim around the entire island of Ireland.

If completed, the Costcutter Swim 360 team of Maghnus and David Burns, from Coleraine, will be the first people to swim the entirety of the Irish coastline and likely the longest verifiable swim ever recorded in the Atlantic.

The pair - veterans of an epic 14,000km journey from Istanbul to Shanghai by bike, foot and raft - will attempt to complete the swim in 120 days, braving hyper weight loss and the constant threat of hypothermia, burning up to 7000 calories per day in the process.

The duo set off from Dalkey this Wednesday, together with the support team of Phillip Hatton and Leish McPartland, with Corbally lawyer turned adventurer Maghnus admitting just before the start that he was both “nervous and excited”.

“We don’t really know how we are going to fare, with the cold, the different logistical challenges and spending as long as we intend to in the water, there is a lot of unknowns, so there is a bit of nerves, and I am just anxious to get going,” he said.

They aim to swim two six hour shifts in a 24 hour period, with only poor weather granting them a day off. The goal is to swim 15-20km a day, which would see the team return to the starting point inside 120 days.

Due to currents and coastlines, they will have to swim up to 20km offshore on the west coast.

Entirely self-financed, the duo hope to raise funds for RNLI Lifeboats and Gorta Self Help Africa - the latter whom they have fundraised for over several expeditions. They have raised close to €100,000 through the various expeditions they have undertaken over the last seven years.

The motivation is hard to explain, but they yearn for the endurance, the “slog” as Maghnus refers to it, and he viewed this swim as the “last great man-powered challenge on this island as yet unconquered”.

It is a bonus to them both that the challenge lay at home, but there is the acknowledgement of, as David says, “stepping somewhat into the unknown”.

Phillip Hatton said that the success of the expedition will “largely hinge on our ability to adapt to and deal with changeable weather and sea conditions, carefully balancing progress with safety”.

“There is not really much of a template for this. For both of us, it is definitely the case that if it does turn into a slog, that is where we are most comfortable,” said Maghnus.

“If the logistics start to work for us and it is a matter of swimming 12 hours a day, day by day, simply that, then I think that is somewhere we would both be reasonably comfortable. So that is where we would be confident, but like anything, you can go out thinking you are in good mind frame, but you never really know until you start.”