Limerick’s metro-mayor to take to the skies 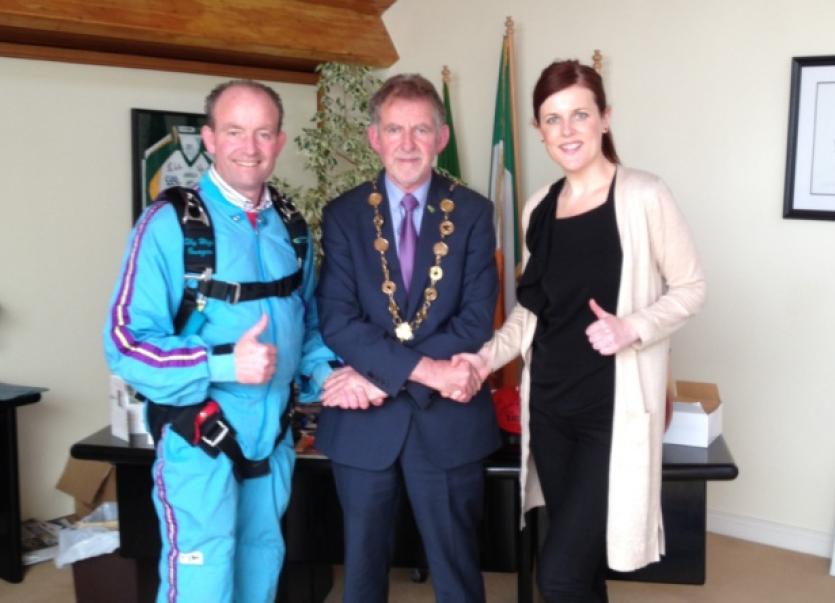 LIMERICK’s metropolitan district mayor is to jump out of a plane at 13,000 feet later this month, as he takes part in a charity sky dive.

LIMERICK’s metropolitan district mayor is to jump out of a plane at 13,000 feet later this month, as he takes part in a charity sky dive.

Mayor Michael Sheahan is to plunge into the air on Sunday, June 28. The Fine Gael councillor is doing the sky-dive in a bid to raise money and awareness for the Mid-West Spinabifida and Hydrocephalus Association.

Based in Castletroy, the charity exists to provide services with people who face the condition, which causes incomplete development of the spinal chord.

It is not the first time Mayor Sheahan has raised money for the Mid-West Spinabifida and Hydrocephalus Association, having also competed in the Great Limerick Run 10k for them.

“They approached me initially. I have been very enthused by the work they have been doing. They have a series of fundraisers coming up, and they felt as the outgoing metropolitan mayor, it would be a good bit of publicity for them,” said Cllr Sheahan.

As part of the challenge, the councillor will leap out of a plane three miles above the ground. He will freefall two miles at approximately 120 miles per hour before opening the parachute at 5,000 feet and drifting to the ground safely.

Despite this, Mayor Sheahan said he is not afraid.

“There are certain things in life you have only one opportunity to do. I am unusual that way, I don’t get scared. I take challenges, and I believe the glass is always half full. It is a once-off experience, and if I can bring a little bit of publicity to it, and raise much needed funds for the charity, I will be happy,” he said.

Although he admitted that come the morning of the skydive, he may have a small tinge of fear!