Postman and postmistress team up to tackle 26-mile challenge 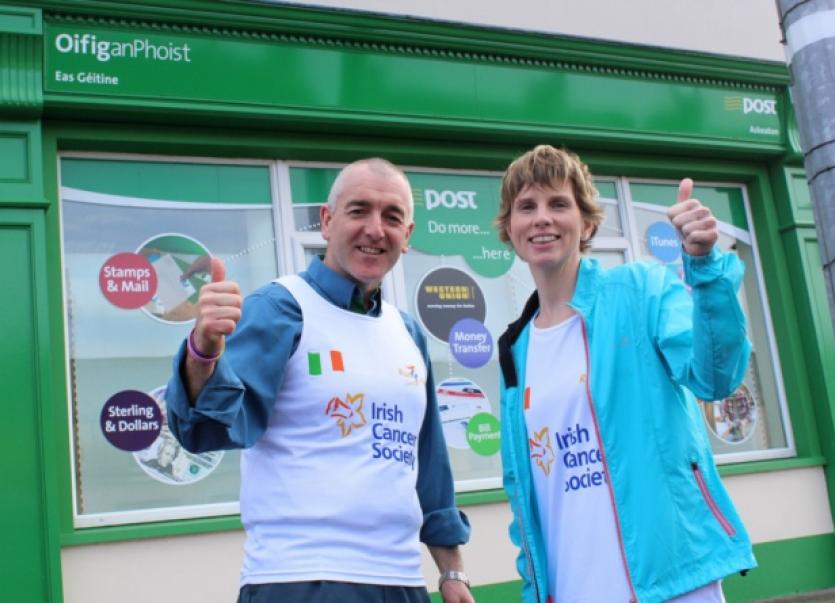 He’s used to doing the morning postal run, but next month Askeaton postman JJ Sweeney will be taking on a much more daunting challenge when he tackles the London Marathon, along with postmistress Yvonne Sheahan and her brother Theodore.

He’s used to doing the morning postal run, but next month Askeaton postman JJ Sweeney will be taking on a much more daunting challenge when he tackles the London Marathon, along with postmistress Yvonne Sheahan and her brother Theodore.

And it’s all thanks to his experience in dealing with angry dogs.

The three have set themselves a target of raising at least €10,000 for the Irish Cancer Society.

But Yvonne revealed that the reason she asked JJ to get involved in the first place was so that he could keep her safe from dogs while running.

After being bitten by a dog while taking part in a local 10k last year, she decided to enlist JJ’s help, knowing that, like most postmen, he had plenty of experience dealing with aggressive canines. “I said to JJ – if you keep the dogs away from me, I’ll train you how to run fast,” she recalled.

So far, they have raised almost €6,000 through sponsorship as well as other events such as bag packing and a coffee morning.

“We started training last year and have been building it up since. It has been hugely positive,” said JJ.

“We have got great support from everybody; it has been very humbling,” he added.

Aged 46, this will be his first marathon but he says he is looking forward to the challenge. “I wouldn’t be a huge fan of running, but I decided to go for it because it’s for a very good cause,” he said.

Unlike JJ, Yvonne has some prior experience of marathon running, having completed the 26 miles on two previous occasions - in 2007 and 2010.

“Training is going well. We get out for three hours midweek and one long distance run at the weekend,” she explained.

Since they began training last August, the group have completed two half marathons and are currently up to over 30k in training.

JJ recently suffered a minor setback when he tore a calf muscle but is working hard on his rehabilitation and is determined that he will be ready for London on April 26.

“Either way, even if I have to walk it, I am going to finish it,” he said confidently.

The group have received great support from the local community since they undertook the challenge.

“I have sponsorship cards here in the post office and people have been coming throwing money at me,” Yvonne commented.

Following a successful fundraising coffee morning last week, their next event will take place in the Askeaton Leisure Centre where management have offered them the use of a treadmill for a day to stage a relay marathon. They are looking for 42 people to come along on April 18 and run a kilometre each on the treadmill while making a donation to the charity fund.