€18m for ‘iconic’ crossing of the River Shannon 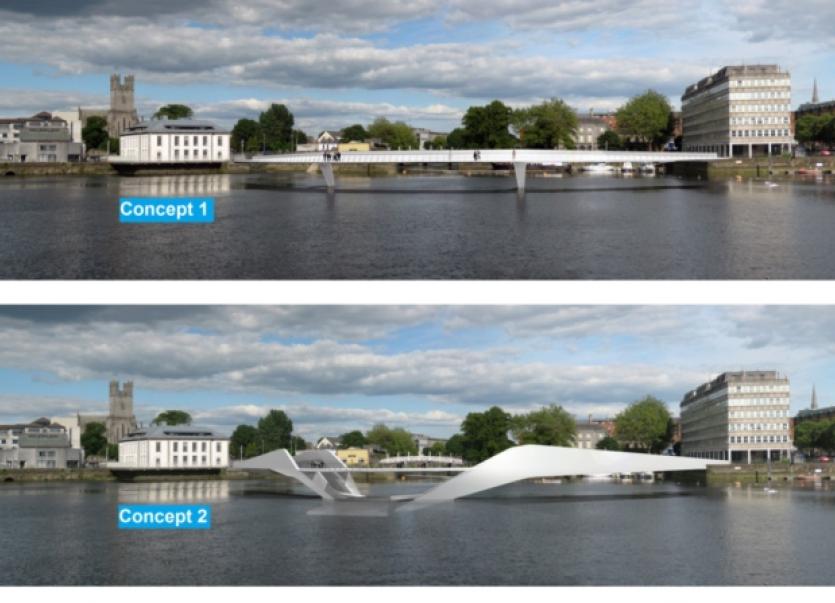 A NEW pedestrian bridge linking Arthur’s Quay and King John’s Castle could cost up to €18 million to build.

A NEW pedestrian bridge linking Arthur’s Quay and King John’s Castle could cost up to €18 million to build.

Councillors have been asked to approve the project, which will be funded by €4m in loans to the council, a €6m grant from Failte Ireland, plus €7.8m from “other” sources.

When councillor James Collins asked finance boss Tom Gilligan where €7.8m will come from, he says he was told at the private briefing it may be from sale of public assets.

According to Limerick City and County Council’s proposed budget for 2015, €2m will be spent on the bridge this year, €3m next year and the remainder in 2017.

“This is not a project that councillors are championing. It is someone else’s pet project. We have finite resources, and there are lots of other projects which can deliver a better return,” said Cllr Collins, Fianna Fail’s metropolitan leader.

“I rang the other day to get a window replaced in an old lady’s house and was told there is no money to do it,” he added.

Cllr Collins is also upset members have not been given any in-depth information on the footbridge project.

“I’m sure there will be some tourism derived from it. But there is no business case, no cost-benefit analysis or anything,” he added.

Another pedestrian walkway, the Living Bridge was built in UL at a cost of €12m back in 2007.

When former economic director Tom Enright first revealed plans for the city’s footbridge, he predicted it would cost around €3m, saying it is “something that could really change the face of the city centre”.

A council spokesperson said: “In relation to capital projects, these are designed to be completed over a number of years, and only indicative sums are mentioned in the capital budget. We are confident resources should become available at the appropriate time to enable a project of this nature to proceed”.