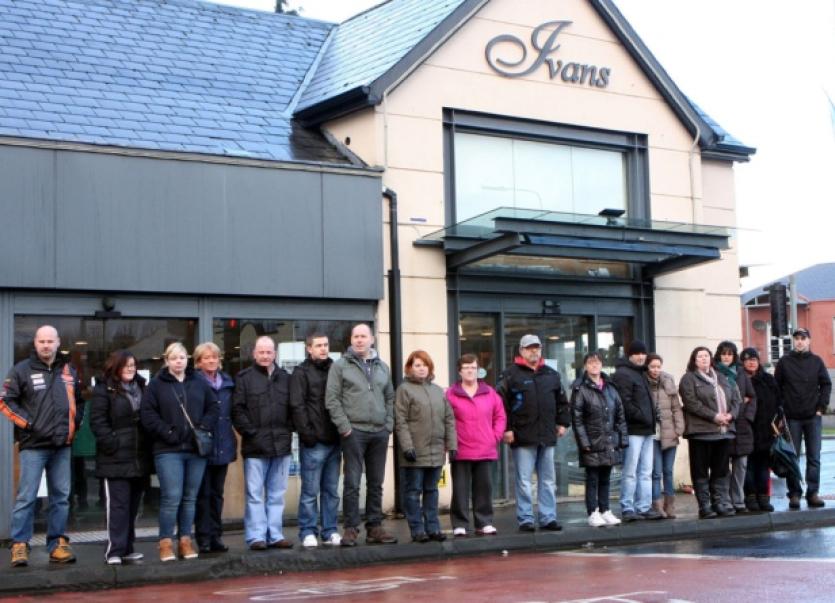 RETAIL staff who have staged a sit in at Ivan’s over unpaid wages and redundancy, are hopeful of a solution in the coming days.

RETAIL staff who have staged a sit in at Ivan’s over unpaid wages and redundancy, are hopeful of a solution in the coming days.

The 30 staff affected remained in the Ennis Road store over the weekend in a bid to get redundancy pay owed to them, back pay, and documentations to allow them claim social welfare.

They have received support from Deputies Kieran O’Donnell and Jan O’Sullivan as well as Frank McDonald, of the Limerick Resource Centre for the Unemployed.

It is understood accountants Deloitte are in communication with the Bank of Scotland to formally appoint a liquidator to the store, which had traded for 38 years before closing last week.

“A solution could come at any time. The workers are just waiting, and hoping,” Mr McDonald confirmed.

Staff who are keeping an around-the-clock presence at the store are in good spirits, he added.

“I think they are resigned to the fact that their jobs are gone. They are just hoping they will get what the are entitled to,” he added.

Store owner Ivan Cremins addressed workers last week, and gave an undertaking they would get everything they required.

Workers got a commitment to have letters printed which would allow them claim social welfare, and Mr McDonald has taken up the opportunity to have an input into the wording, to speed along their claims as quickly as  possible.

Members of the management team met with bank officials on Saturday with a view to appointing a liquidator.

News of that move is not expected until this Tuesday at the earliest.

Workers’ spokesperson Mary Sheehan, of Kileely, said: “We have had fantastic support from local businesses and hotels, who have been coming in behind us, giving us food and drink.”

In a statement, issued late on Wednesday last, Mr Cremins said the closure was partly due to the fact three major supermarkets opened within 500 yards of Ivan’s, as well as the development of the Ring Road, which bypasses Caherdavin, as well as the repeal of the law banning below cost selling.