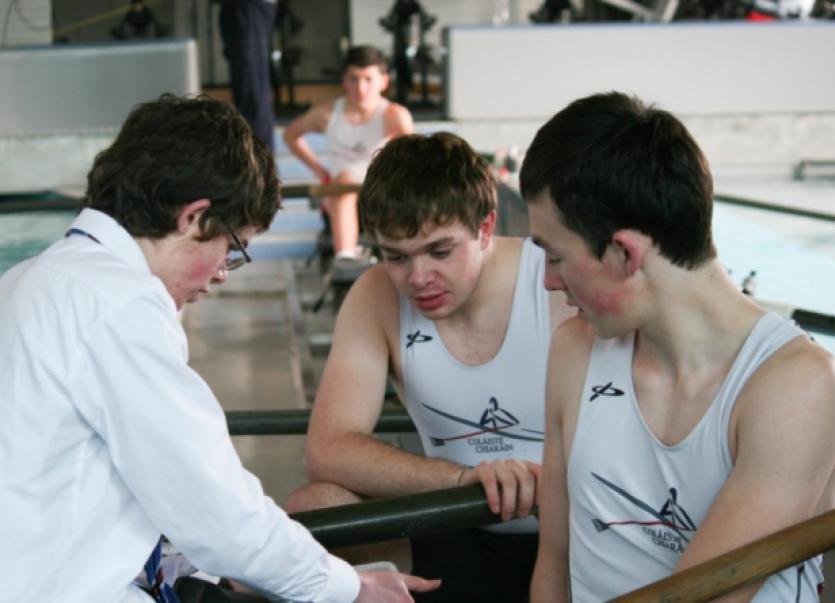 A LIMERICK student is LA bound after his ingenious project on improving the timing among crew in a rowing boat captured the attention of some of Ireland’s top engineers.

A LIMERICK student is LA bound after his ingenious project on improving the timing among crew in a rowing boat captured the attention of some of Ireland’s top engineers.

Conor Foy, who attends Colaiste Chiarain in Croom, will join over 1,500 students who will compete at the Intel International Science and Engineering Fair (ISEF) 2014 in Los Angeles for a top prize of $75,000.

The teenager, who hails from Crecora, received an Excellence in STEM (Science, Technology, Engineering and Maths) award at the prestigious SciFest@SFI Discover competition last month.

Conor came a very close second in the national competition and he was invited to the Intel facility in Leixlip, where he presented his project to two engineers from the company.

The engineers were so impressed with the quality of Conor’s project that he will now compete at Intel ISEF 2014 along with the competition winner Paul Clarke from St Paul’s College in Raheny, Dublin.

Conor will travel to Los Angeles in mid-May with his teacher Edel Farrell, courtesy of Intel Ireland. It is the first year that they have sent two students to the competition.

The idea for the project, Conor explained, came about while he was rowing himself.

“I was a cox for a number years which is a person who steers the boat,” explained the 17-year-old who is the son of Mark and Christine and has two siblings Kalin and Aidan.

“I was the one in charge, trying to help the guys in the boat to improve their performance so I decided to see if I could try to make something that would help them as well.

“The most important thing was that their timing was perfect and they were all synchronised so the idea was to make something that would tighten up their timing,” added the fifth-year student.

The device, he said, measures the different timing between each crew member “and tells them how far off they are to the guy at the very front who sets the timing.

“It’s a small box with just a simple LED read out. It’s quite straight forward and then there is a small box that sits on each oar which can measure when the oar is being turned over.”

Conor took the device out to Castleconnell Rowing Club to get their opinion on it.

Conor will be making the trip to LA with his teacher Edel Farrell, who has been teaching him since his first year in Colaiste Chiarain.

“He is excellent at science and maths. He has been in the Young Scientist a couple of times as well,” said Edel, a native of Monaghan now living in Annacotty.

“He was working on the project outside of class time. He worked mostly on it on his own at home and he got support from UL - he uses the rowing tank in UL so I would drive him in and out of there but mostly he would work away on it on his own,” said Edel.

“Conor comes from a rowing background himself and we are into rowing in the school so it was nice that he was able to take something that we are very involved in in the school and see could he find a way to apply it in a practical level.

Mr Malone said it was clear at SciFest that there was nothing between Conor and the winner, Paul Clarke, who also won the Young Scientist competition this year. “I think Intel did say they were so impressed with Conor that they wanted to revisit the situation,” said Mr Malone. “It is a wonderful opportunity for him to be there with the winner of the Young Scientist and it will be of great benefit to himself and the school. He is a very affable, helpful young fella who does an awful lot for others in the school.”

Conor and Paul will be judged by a team of over 1,200 highly qualified judges at the competition in Los Angeles.