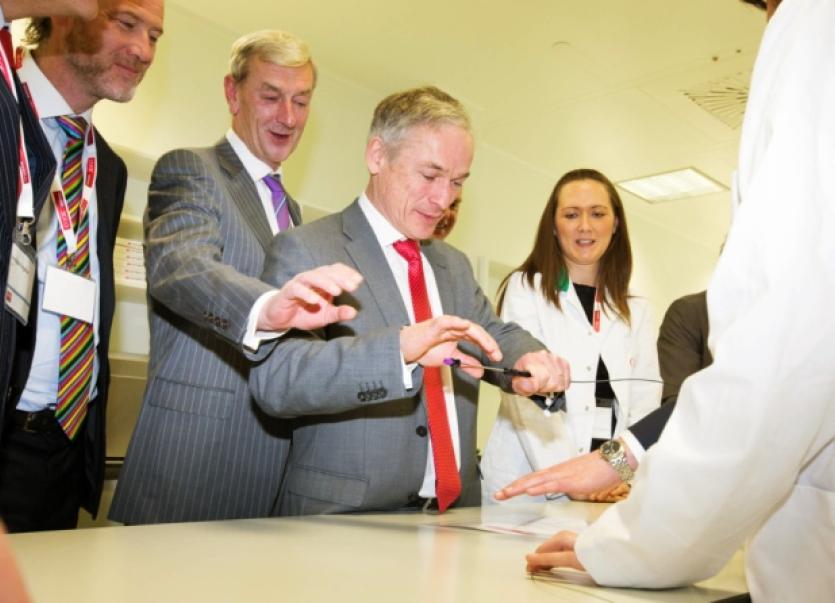 A €10M investment by Cook Medical in a new innovation centre in Plassey anchors the medical devices manufacturer in Limerick and could lead to further jobs growth at a firm which already employs 800.

A €10M investment by Cook Medical in a new innovation centre in Plassey anchors the medical devices manufacturer in Limerick and could lead to further jobs growth at a firm which already employs 800.

Supported by IDA Ireland, the centre has been officially opened by Enterprise Minister Richard Bruton.

Equipped with state-of-the-art technology that simulates clinical conditions, Cook engineers will work closely with physicians in developing new devices which, if successful, would ultimately be manufactured on the growing Limerick site where non-invasive vascular, gastroenterology and urology devices are already produced and sold around the world.

Bill Doherty, executive vice-president, said collaborating with doctors was what Cook had done since it was founded in the USA 50 years ago. When Dr Charles Dotter performed the world’s first percutaneous angioplasty - saving the leg of his elderly patient - in 1964, he had performed the pioneering surgery with Cook products, Mr Doherty said.

“Our best ideas have come from listening to physicians who are always seeking less invasive ways to treat patients. This approach to product development was established from the beginning with Dr Dotter and it continues today. Our process always starts with listening to doctors’ needs,” he said.

One such is Dr Jan-Werner Poley, head of endoscopy at the Erasmus Medical Centre in Rotterdam, who described his involvement in developing gastrointestinal products with Cook in Limerick.

“I’m sure that with the creation of this fantastic innovation centre, the collaborative relationship between engineers and clinicians can become even better than it already is today,” said Dr Poley.

Minister Bruton said the research undertaken by Cook would have long-term benefits for patients and for the HSE.

“The pressure that is on all governments to fund health means companies have to be more innovative; more plugged in to what works what brings down costs. And of course non-invasive technology, treating people in a way that doesn’t involve long recovery times, that is more effective, that delivers a better outcome; that is at the heart of any objective that government sets,” said the minister.

Andrew Vogelaar, IDA Ireland, said the evolution of Cook in Limerick over two decades made the company “the ideal on what you are looking for in foreign direct investment”. It had grown from a labelling and distribution operation to a manufacturing base before developing into a European HQ and an R&D centre.

“That is really important because what we are finding is that with companies who are investing in research and development, there is a real correlation with them maintaining and increasing employment. In the companies that are not investing in R&D, we are finding that the numbers over time will decrease,” he said.