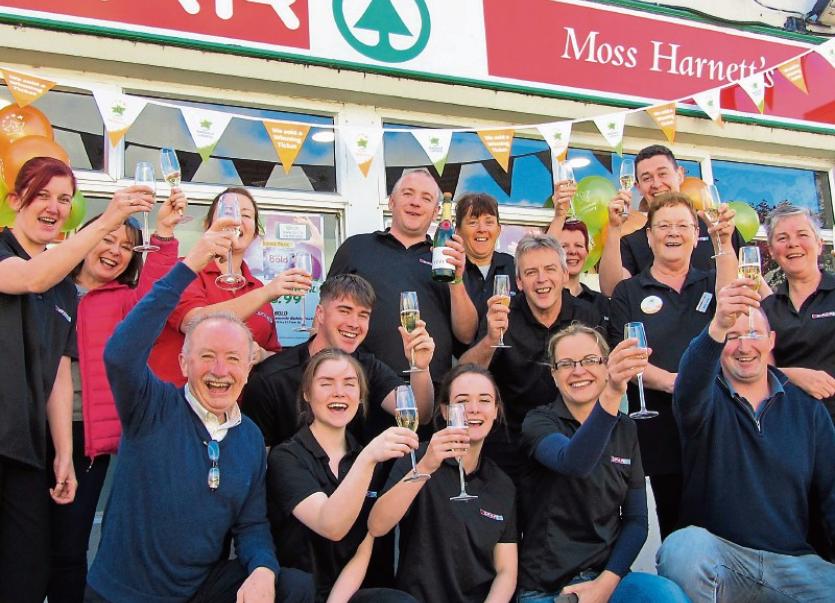 A LIMERICK family has collected a cheque for €500,000 after winning the top prize in the Euromillions Plus draw ten days ago.

The family, which wishes to keep its win private, purchased the winning Normal Play ticket at Moss Harnett’s Spar, Abbeyfeale on September 25 – three days before the draw.

Speaking at the offices of the National Lottery this Tuesday, the holder of the winning ticket revealed he had used his own numbers when buying his ticket.

“I’ve always used my own numbers, since the very beginning of the Lotto and EuroMillions. They’ve been very good to me with small wins here and there but obviously I’ve never won anything as big as this. Thankfully we won’t have to worry too much about all this talk about the budget. We’ll be very sensible of course but we’re in a more comfortable position now,” he said.

The lucky husband told National Lottery officials that he first found out about his good fortune while at work but had to play it cool to avoid detection from his colleagues.

“I was in work the following morning and one of my colleagues told me that the winning ticket was sold at Moss’s Store in the town and my heart nearly stopped – knowing that it could possibly be me,” he said.

“I kept completely calm and a few minutes later I had to find a quiet corner to check my ticket. That was it, I had the winning ticket, it was such a surreal feeling. I wanted to scream and shout the place down but I didn’t want anybody to know or to make a fuss. I had to spend the entire day at work in a haze, knowing that I’d won a half million quid but I couldn’t tell anybody. It was torture – a nice kind of torture, of course,” he laughed.

The man and his family are now planning some very low key celebrations at home with close family and friends,

“This is literally a dream come true! It’s the perfect amount of money that just makes life that little bit easier. We’ll be meeting our bank manager during the week to pay off our mortgage which will be an amazing feeling. Other than that, we’ll obviously have a little gathering at home but the rest of the money will be put towards college funds and whatnot to give our young kids the best start in life,” he added.