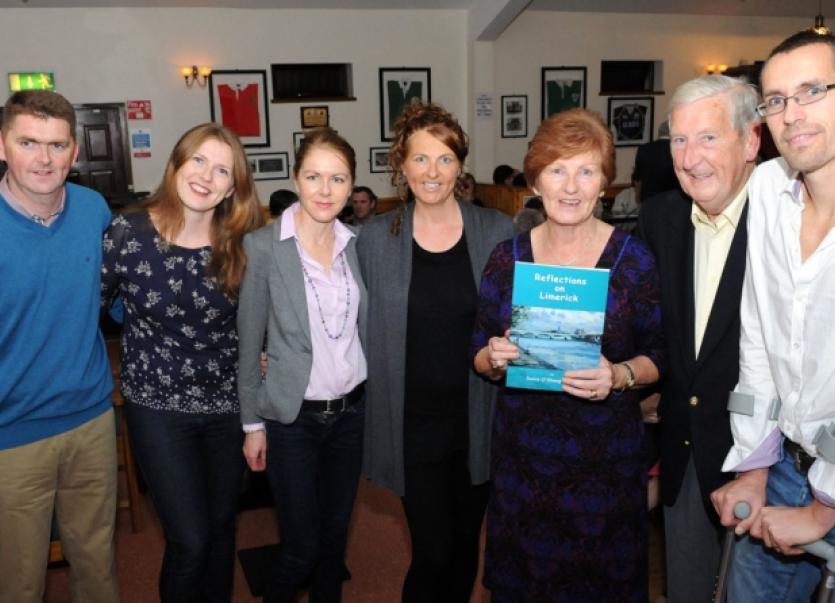 SOME people in looking at the big picture can miss the finer details in life. Thankfully, Denis O’Shaughnessy isn’t one of those people. It’s the little nuances of local life that have interested him - and his readers - the most.

SOME people in looking at the big picture can miss the finer details in life. Thankfully, Denis O’Shaughnessy isn’t one of those people. It’s the little nuances of local life that have interested him - and his readers - the most.

The prolific author, who now has eight books under his restless pen, is back from a five-year hiatus with Reflections of Limerick, a 175-page compilation of his favourite stories - some of which made headlines in their day, and others which have never seen the light of day until now. They are stories, he says, about the “ordinary people” of Limerick, who were, nonetheless, extraordinary characters.

“When I started writing there were books on the Siege of Limerick and other important historical events, but no one was writing about these characters. It really is a celebration of the ordinary people of Limerick and their lives, their wit, their idiosyncrasies, and their love of music and sport. It’s a formula that has proven very popular down through the years,” he said.

Among his many admirers was the late Richard Harris, who described his books as ‘showing us the real Limerick’.

Many stories were gleaned from people in O’Driscoll’s pub in Corbally, or in Angela Conway’s in his native St Mary’s parish, from characters who were a dying breed and “dying out, with no one left to tell these stories.” Denis stepped in to “save them for posterity”.

“I often said to myself: ‘My God, these stories have to be written down’ and would go home and jot them down on the computer.”

If he did indeed miss his vocation in life as a journalist, he has more than made up for it in the intervening years - ironically after leaving the Limerick Leader, where he worked for 46 years as a compositor, painstakingly inserting each letter of a word into the frames for printing.

Now 76, Denis joined the Leader at the age of 14, where “the printed word quickly rubbed off on you”.

When he retired in 1997 his years of experience were put to good use when he published his first book on Limerick, A Spot So Fair, which was largely concentrated on St Mary’s parish. Such was the strength of his passion for local history that six others self-published works were to follow, including Limerick: 100 Stories of the Century, which was printed in 2000, and he also edited the hugely popular Kemmy’s Limerick Miscellany. Now, he has gathered together over 50 illuminating and quirky tales from the recent past in Reflections of Limerick.

Among the more unusual stories which reveal the social, and indeed Catholic attitudes of the 1940s, is that of a billboard poster erected opposite St Mary’s Cathedral. The ‘Beauty by Icilma’ cosmetics poster showed a woman, with a slight suggestion of her breasts showing through her sweater.

Outraged, a person unknown to this day, climbed up a ladder and pasted brown paper over “the offending part of the young lady’s anatomy”, he wrote.

Being in the newspaper business for nearly half a century, he was privy to many colourful characters, and reporters whose own life stories would possibly have made for more interesting reading than the articles they put their bylines to.

Among them is the story of former Limerick Leader photographer Donal McMonagle, who was under strict instructions to try to take a photograph of the Russian satellite Sputnik 1 when it was sent into space in October 1957. “Sadly, when the film was developed there was no sign of Sputnik, the camera having failed to pick it up, so small was the image. Undaunted, Donal got to work with his white felt pen, and marked the spot where he thought Sputnik would have been. The result was that readers marvelled at the wonderful shot, possibly the only newspaper in the world to capture its image!”

Other stories reveal the Limerick link to Jane Austen, the Limerickman who became a self-made millionaire in the United States and literally tried to buy back the Six Counties, and a Traveller couple from Limerick who broke into the Guinness Book of World Records with their towering wedding cake, which stood at 25 tiers high, and 13 feet, six inches high in Athlunkard Boat Club. The “history making cake”, which cost £385, took Keane’s Bakery in Limerick three days to make - and 45 eggs.

Speaking at the launch in St Mary’s rugby club on Friday last, editor of the Limerick Leader, Alan English, said: “The big turnout tonight is another indication of the huge sense of community that exists in the parish and St Mary’s is very fortunate to have, in Denis O’Shaughnessy, an excellent writer who has done a wonderful job in chronicling so many fascinating events and characters.

“His latest book is hugely enjoyable, and possibly the best he has produced to date. Long may he continue shining a light on Limerick social history.”