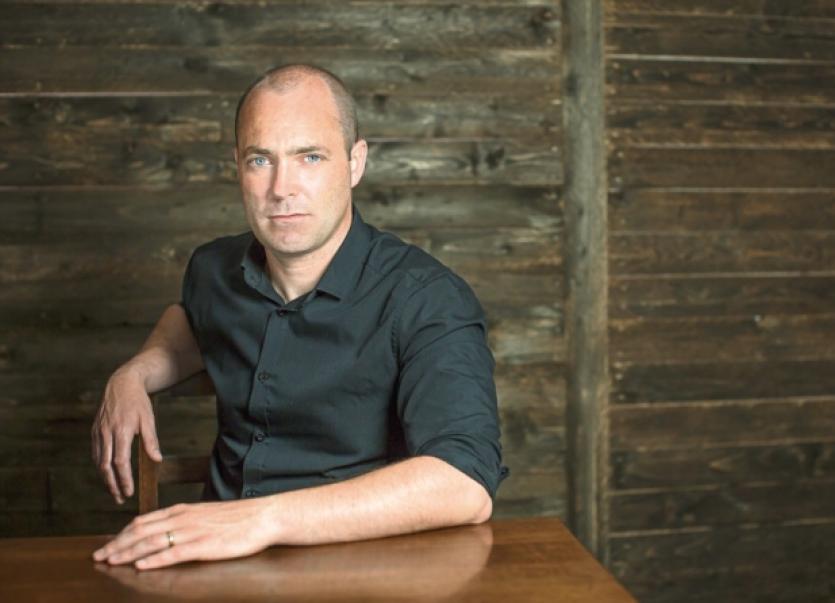 Award-winning author Donal Ryan talks revealingly to Norma Prendiville about writing, his UL work and the woman who inspires him.

Award-winning author Donal Ryan talks revealingly to Norma Prendiville about writing, his UL work and the woman who inspires him.

IN the short few years since 2012, when his novel The Spinning Heart was published, Donal Ryan has been catapulted on to the best-sellers lists and into the world of literary prizes.

But the two moments that signalled this big change in his life are more private.

Since childhood, he had been writing bits and pieces and always threatening to write a novel. Finally in 2008, he achieved that with The Thing about December, his first completed novel but which came out after The Spinning Heart.

“That evening in the winter of 2008 when I finished that novel I felt that something had changed in my life. I felt an intense, blessed relief. I’d finally done the one thing I’d wanted to do since childhood.”

His other feeling that evening is that he had made his wife, Newcastle West born Anne Marie, proud. “Impressing Anne Marie is my main motivation in life,” he reveals.

“Another moment I remember clearly as being a moment of profound change was sitting in my car outside the office of The Lilliput Press in Stoneybatter in 2011 and ringing Anne Marie to tell her they were going to publish both The Spinning Heart and The Thing About December.

“That was the first time I felt I could actually start to see myself as a ‘proper’ writer. Which is ridiculous, really. As soon as you put a word on a page you’re a writer. But there was something in that moment, a kind of damburst of emotion: we’d been hoping for years for a break, for a chink in the armour of Irish publishing, a way to sneak in, and we’d got it, finally.”

Since then both novels have been taken up by Random House and translated into fifteen languages; the BBC has optioned The Spinning Heart and Donal has a new, three-book, worldwide deal in place.

“I haven’t changed as a person,” Donal goes on.

“Maybe I’m less sure of myself than I was before, in some ways. I knew for a fact that I was good at my job when I was a labour inspector. I’m assailed on a daily basis by self-doubt now. I’ll never get a swelled head; there’s no award or amount of sales or critical praise that will counter the effect of just one negative comment, one bad review.

“I let myself get knocked all the time, and I have to really work at not letting things worm their way into my consciousness. I’m a baby. Poor Anne Marie has a full time job giving me pep talks, copping me on.”

One thing that has changed however is that he is now a full-time writer. And his writing day has also changed. Before, while working with the National Equality Rights Authority, now the Workplace Relations Commission, he wrote “religiously” between 9pm and midnight. Now, he says, the routine changes a lot.

“I like to run in the early mornings to get things straight in my head and then write before lunch – 300 words allows me to not feel guilty, 500 feels like I’ve actually gotten somewhere – and in the afternoons I usually meet students from the MA class here at UL or read their work or both. I edit in the evenings, when I have a bit of distance from what I’ve written, and can be more objective about it.”

“I have to budget time carefully but I’ve really gotten that hang of reaching my daily word-count target and leaving it at that. Then I go home and make poor Anne Marie read what I’ve written while I watch her eyes for a certain expression that I’ve come to use as a barometer of merit. It’s not fair on her, really, but I can’t let anything go into the world unless she approves of it.

“I spent a few weeks writing a Christmas story for the Irish Times but when Annie read it I knew it just wasn’t right and so I put it aside and wrote a different one in a fraction of the time and she loved it, so it went out,” Donal says.

Being involved with the MA in Creative Writing at UL, where he has been writer in residence for the past year, is the best thing that’s happened to him professionally, Donal says.

And he extols both teaching colleagues and students.

“It’s great to be surrounded by so much passion for writing and by so much talent, to be immersed in this world of words. My work at UL allows me to switch off completely from what I’ve been doing myself and I’ve found that it’s allowed me to think about aspects my own process that I hadn’t consciously considered before, and to work on them.”

And he is happy that he will, in 2016, continue to be associated with the course, although not as writer in residence. That position will be taken up this year by poet Mary O’Malley but Donal will continue doing workshops.

“I actually get to spend more time with the kids now that I’m working from home and down the road in UL, so that’s a huge positive about this temporary career change,” he adds.

Last year, Donal’s first collection of short stories, A Slanting of the Sun, clocked up both critical and popular success. But he reveals, the attraction of the short story form has faded a bit for him.

“They nearly caused me to give up on this whole mad caper! You can get lost a bit in a novel, go a bit wrong, and it can be okay. A short story offers no cover; it’s a barren landscape and there are snipers all around. Each sentence carries a heavy weight. But when a short story works it’s a glorious feeling. The payoff comes much more quickly with a story.

“A novel can be formless and wrong-feeling for months and years. A story forms itself more quickly, in hours or days sometimes, and sometimes they go onto the page smoothly, and resolve themselves, and allow you to think of yourself as a proper writer for a while.”

His next novel, called All We Shall Know, is already finished and with his publishers.

“The main character is a teacher who has a brief affair with a young Traveller she’s been helping with literacy and gets pregnant,” Donal explains.

“It’s funny, people often say to me that my novels and stories are full of misery and sadness and desperation,” he goes on. “ I don’t see them that way at all. All of the characters I write are utterly human, I think, and they’re almost all involved in some kind of a revelatory act, some kind of a confession, a description of themselves.”

His characters, he goes on, are often struggling with the weight of some new knowledge and layers have been peeled away.” They’re like Lear in the last act, divested of all constructs, assailed by truth. Everyone is marginalised in a way, everyone feels at times like they’re looking in from outside, like there’s some trick to life that they haven’t learned. We all have a gap between our inner and outer selves that I try to cross in fiction.”

But ultimately, Donal Ryan says, he wouldn’t be a writer without his wife Anne-Marie, “My family and friends have always been a massive support. My parents are amazing people. They work non-stop and they tell the best stories you ever heard. My sister Mary is my biggest promoter; she fights my corner constantly. She’s a serious book-lover as well, she really knows her stuff and gives great advice.”

“I wouldn’t be a writer without Anne Marie. As I’ve said, I only do it to impress her! She’s my first reader and my biggest inspiration. Her belief in me drives me on, even when I can’t see any way forward.”