Farewell to writer Willie: ‘We always had a good community spirit’ 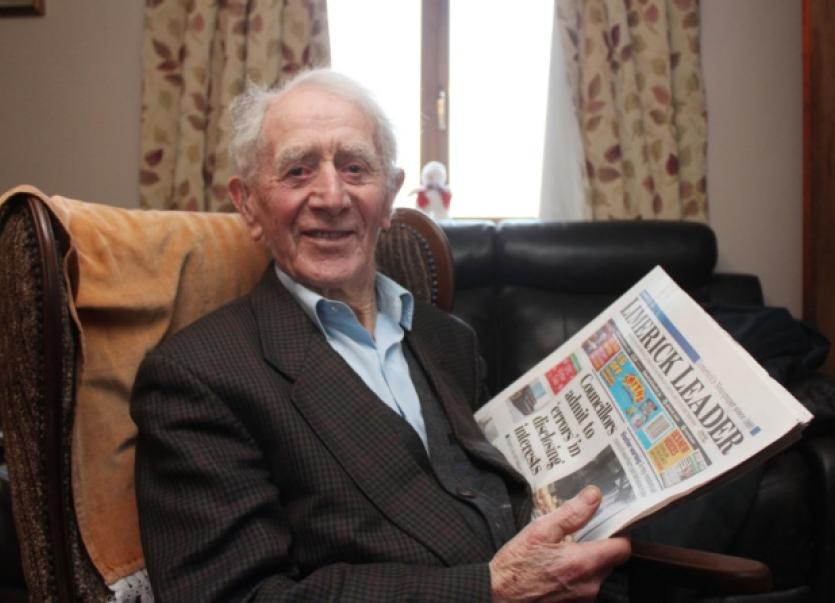 AFTER 31 years of writing local notes for the Limerick Leader, William O’Mahony is putting down his pen. Aine Fitzgerald talks to him about retirement.

AFTER 31 years of writing local notes for the Limerick Leader, William O’Mahony is putting down his pen. Aine Fitzgerald talks to him about retirement.

WHEN the long-standing Limerick Leader notes correspondent for the Ballylanders area, the late W J Crawford passed away, William O’Mahony took up the mantle.

31 years later, a discreet paragraph at the end of his weekly notes offering, announced William’s retirement, under the heading: ‘Fond Farewell’.

“Life has changed since my young days,” says the 92-year-old, as he adjusts to the first days of life as a retired man.

“Motor cars were very scarce. I lived during the terrible winter of 1946. The world of cattle died.”

The interview takes place over the phone – William speaking from his two-storey home in Ballylanders, a half a mile from the Galtee Mountains, this journalist shooting the questions from Limerick Leader HQ on O’Connell Street in the city. However, at times it feels like it’s being conducted in a conflict zone.

“Pardon,” says William, loudly, on several occasions throughout the 40-minute interview before he reveals, “There is an aeroplane or a helicopter flying overhead”. He’s puzzled as to why it’s been hanging around for so long. His nose for news is itchy.

One of four children, William attended the local national school in Ballylanders. He is the only one of the 11 pupils who went to the school who is alive today.

“Everybody walked to school and there was no danger. In the summertime, all the children went barefoot,” he recalls.

He is also the only child from the school who went on to secondary school; making the 15-mile round trip each day to Mitchelstown on his bike.

“I had a pal cycling with me, Michael O’Davern - he was doing a mile and a half more than me. He was cycling from Ballylanders village to Mitchelstown. He was a class lower than me.”

On a stormy morning, the Bog Road would put the teenage William’s calf muscles to the test - the pedals of his bike would struggle to rotate while the strong breeze and heavy rain were conspiring against him.

The first bicycle William had going to school cost only 30 shillings - less than €2 today.

“And a loaf of bread in my young days was only four pence which would be one and a half cents today. Petrol was only two shillings a gallon.”

Of the 25 students who started off the first day in the secondary school in Mitchelstown, only two stayed the course and completed the Leaving. William was one of them.

“The two of us got very good results,” he recalls. “My pal went on to be a dentist and I was supposed to go onto higher education but I stayed at home on the farm. If I had gone to college I probably would have studied agriculture.”

Life on the farm was hard at that time - there were no tractors but, people, William insists, “were happy”.

“They took no notice of it. Life was slower and easier. Now people don’t seem to have time to talk. Even though they were busy at that time they had time to stop and have a chat.”

When William began doing the local notes back in ’84 “all the modern techniques weren’t there at all.

“We sent them in by letter and I remember driving in a few times myself and handing them into the office. I used to drive in and I’m still driving mind you. I drive one of them Micras.”

A personal friend of William’s, and a name synonymous with Ballylanders, the late John Gallahue would sometimes drop in the notes on William’s behalf if he was travelling into the IT college in Limerick.

“It was nice to report about this and that but there were a few times that I could be a bit controversial,” William points out. Over the years, William has been involved in a number of local organisations and clubs which have fed him material for his weekly notes. He was also sporty and was on the panel that claimed the 1952 county football title.

“Someone was looking for me one time and they said I could be found anywhere but in the ICA - the Irish Countrywomen’s Association,” he says, giddily.

“We always had a good community spirit in Ballylanders but I remember one time there was a discussion and the discussion was so hot that I went home and walked the road for half an hour, or even an hour,” he says.

Sometimes local people would send him information but more times they mightn’t. “You would often be left to your own discretion to find things out - by word of mouth or by having your ear cocked.”

In more recent years, he would generally put the notes together of a Tuesday morning.

“I am involved with the FAS office for years. The secretary would type them there for me and send them in by internet. I would have them handwritten for her.

“I found that you could be in bed at night and you could come up with some great sentences and if you had a pen you could write a great line. You mightn’t get the same flow during the day. Have you found that?” he asks.

While he has a computer, Williams says, he “wouldn’t have the slightest clue” how to turn it on, and has no intention of learning. “I’m illiterate as far as computers are concerned. I’ll stick with the pen and paper.

“My son has the computer and if I was taxing the car he would do it for me.”

The topics in the notes he feels have more or less remained the same over the decades - “It’s still local gossip, isn’t it?”

“Local events like sport, matches, deaths and so forth.

“I’m not praising myself but I was praised for writing nice obituaries about local people who died. I enjoyed doing that.”

As well as working on the farm and keeping his ear to the ground for local information and interesting tidbits, William was also kept busy with family life. Sadly, his wife Frances is no longer alive – they had three children - one son and two daughters.

“I play cards four or five nights a week in all the local places - there are five or six local places such as Anglesboro, Galbally and Kilfinane.”

Will he miss doing the notes?

“I will,” he says, a tinge of sadness detectable in his voice.

“James Hickey is taking over. James is dedicated - he is involved in a lot of things. As the saying goes, if you want to get anything done, ask a busy person! “