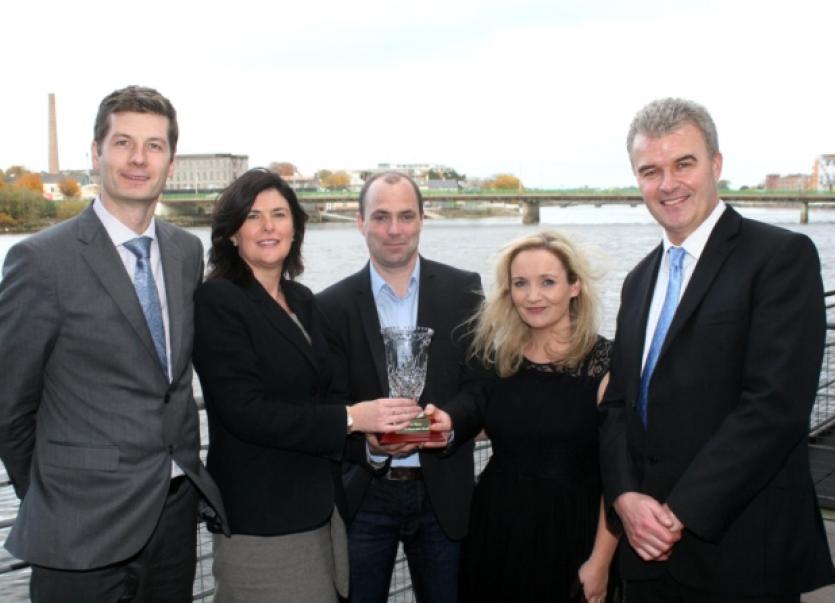 AUTHOR Donal Ryan whose debut novel, The Spinning Heart, saw him longlisted for the 2013 Man Booker Prize, is the Limerick Person of the Month.

AUTHOR Donal Ryan whose debut novel, The Spinning Heart, saw him longlisted for the 2013 Man Booker Prize, is the Limerick Person of the Month.

The 37-year-old who lives in Castletroy is enjoying considerable attention of late for his literary works.

He is among just three Irish authors in the running for the €100,000 International Impac Dublin Literary Award, having been nominated for The Spinning Heart which has been lauded by critics ever since its release.

The book which won the Bord Gais Energy Book of the Year 2012 looks at how the fallout of Ireland’s financial collapse provokes dangerous tensions in a small Irish town.

Donal’s latest novel to be published, The Thing About December, was shortlisted for novel of the year in this year’s Bord Gáis Energy Irish Book Awards.

Donal described being presented with the Limerick Person of the Month award as “a real honour”.

“I’ve lived in Limerick for 13 or 14 years and it’s a place I really love so it really is a privilege to be given this award,” said the Nenagh native who was accompanied at the Clarion hotel for the presentation by his wife, Newcastle West native, Anne Marie [nee Sheehan].

It is Anne Marie, Donal said, who is responsible for his work seeing the light of day.

While he was always writing “bits and pieces”, Donal never had much confidence in what he was writing “and only for Anne Marie, I would never have had.”

He had endured some 47 rejections from publishers before The Spinning Heart, was rescued from the slush pile by an intern working at Lilliput Press in Dublin who raved about it to the publisher, Anthony Farrell.

“I would have thought that 47 was a fairly low number - it was two years of trying to get published for two books,” commented Donal who studied civil engineering in LIT and later again studied law at the University of Limerick.

The rejections, he said, normally followed the same format that the submissions were made in, and were always “firm replies”.

One prominent publishing company sent him an A4 page with the reply: ‘Not for us. Best of luck!’, while an America agent replied via email with the words: ‘What the f**k is this s**t?’ .

“I kept the email,” Donal smiles.

He was “amazed” when word came through that he was on the longlist for the Man Booker prize - widely-regarded as one of the most prestigious prizes in the world of literature.

“I remember when Roddy Doyle won the Booker in 1993, I had this fantasy of ringing my parents [Donie and Anne] saying: ‘I’m on the Booker longlist’. I remember thinking ‘imagine being able to ring your parents to tell them that’.”

Donal was at home in Castletroy on July 23 last when he got to do just that.

It was the day the Booker longlist was announced. He had taken the day off - he works full-time for the Department of Enterprise - and was “fully expecting not to be on the list”.

“I was expecting to be disappointed,” he recalled.

When he eventually got the phonecall telling him the good news, he first took some time to get his head around it by having a cup of tea with his neighbour, Jamie Walsh. Later in the evening, he cracked open the champagne with his wife and family.

As a child growing up in Nenagh, Donal was surrounded by books in the family home. The young Donal was particularly taken by the works of John Steinbeck, and, in his eyes, JD Salinger was “ just amazing”.

“First of all, I thought I was the only one who had that book - The Catcher in the Rye. I was sure,” he emphasised.

“Dad brought it home - I think he must have had two copies somehow. It was black with The Catcher in the Rye written on the front of it. I thought first of all that dad knew JD Salinger and, secondly, it was written about me, and for me. Then, I went to secondary school and everybody knew about it.”

Today, most of his writing is done in the kitchen at night although he does prefer to write in the morning but just never seems to get the time.

“If you are going against the grain and really struggling, it’s not going to really work properly. Normally, you should just relax and don’t over think it and it will flow fairly easily. A bit of pressure is no harm either - a deadline.”

While he used to write everyday without fail, over the last three or four months, Donal hasn’t written that much at all - “just one story that I got out fairly quick but I have to get back into the discipline now in the New Year.”

Writing full-time however, he says, is not financially feasible at the moment.

“Even with the Booker nod and fairly good sales for literary fiction there is still not that much money. There is a trickle of a few grand here and there which is great but it wouldn’t be enough to set me up. It wouldn’t pay the mortgage for the year.”

With Christmas just around the corner, and with two young children, Thomas, 5, and Lucy, 4, there will, no doubt, be lots of books under the tree on Christmas morning?

“There is nothing more important when it comes to education and the development of the mind, than reading, there really isn’t,” said Donal who reads to Thomas and Lucy every night.

“Oh, we have to,” he smiled. “I’d say two nights in the last year, Lucy went to sleep without a story.”

The Limerick Person of the Month award is sponsored by the Limerick Leader, media agency Southern and the Clarion hotel.