Pupils prove County Limerick school is made of the ‘write’ stuff 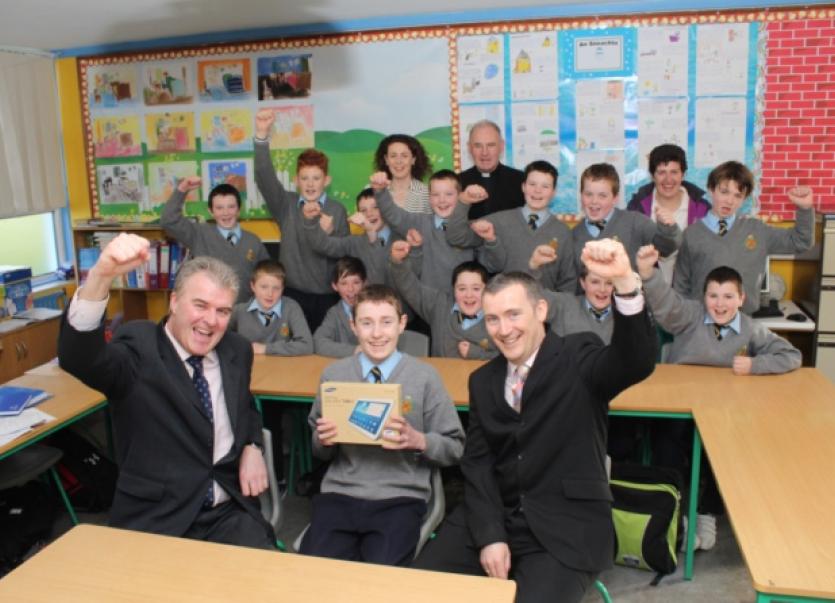 DOON CBS Primary School is celebrating on the double as it had two pupils in the top five of a County Limerick children’s writing competition.

DOON CBS Primary School is celebrating on the double as it had two pupils in the top five of a County Limerick children’s writing competition.

The man behind the novel idea was James Geary of www.readerswriters.ie. The Croagh man has set up the website to encourage and give budding authors the opportunity to showcase their penmanship to a large audience, and receive feedback.

“We all know somebody that has plenty of writing ability but doesn’t put it anywhere. The website is somewhere they can go to, put their work up under a user-name and see what people think,” explained James. The son of the well known community leader Mary Lee Geary, of Broadford, James organised the children’s writing competition to get youngsters to put pencil to paper.

“There were over 120 entries. The standard would blow you way. John Cushnahan, former MEP, judged it for us so it was completely independent. The winning entry was excellent - well thought out, and he made a very good argument,” said James. Entitled “All children should have a mobile phone”, it was the work of 13-year-old Brian O’Donnell from Toomaline, Doon.

Alan English, editor of the Limerick Leader, the media sponsors, presented Brian with the top prize, a 10 inch Samsung tablet and one for the school.

Congratulations also to second place winner, Ellen Reidy, Broadford NS, who received a €100 Eason voucher. Julia Garaowicz of Salesians NS came third and got a €50 voucher for the Art & Hobby shop in the Crescent Shopping Centre. Daire Ryan, Doon CBS and Jack Cusack, Ballybrown NS, who came fourth and fifth, got a year’s subscription to www.readerswriters.ie

Principal of Doon CBS, Br James L Dormer, said they were very proud to have two winners in the top five.

“It is a great day for a small school of less than 60 pupils and three teachers. It shows that bigger isn’t always better. We are one of the type of schools in rural Ireland the Government is targeting for closure.

“It just shows a high standard of education can be achieved in a small school. In Doon we are carrying on the proud traditions of the Christian Brothers and Mercy Sisters,” said Br Dormer, who is the last Christian Brother principal in the country. He wished to pay tribute to sixth class teacher and deputy principal Joanne O’Connell.

Ms O’Connell said Brian and Daire were very talented and have bright futures ahead of them. In recent years Jack Ryan and Ben O’Dwyer also won essay competitions.

Mother of the winning boy, Marian O’Donnell, said there were “unbelievable“ teachers in the school.

“It is all down to them. They are very encouraging, only for them they wouldn’t be entering these competitions,” said Mrs O’Donnell, who is married to John. They have an older son, Paddy. Brian is also good with his hands in another hobby as he is a blackbelt in karate.

Leader editor Alan English, said: “I was seriously impressed with the quality of the entries and Brian was a worthy winner. For one so young, he has a really impressive command of the language and a great ability to write with conviction. I’m sure he’ll go far! It was also great to see almost every boy in the school pucking a sliotar around in the yard at break time. No wonder Doon is producing so many great hurlers these days!”