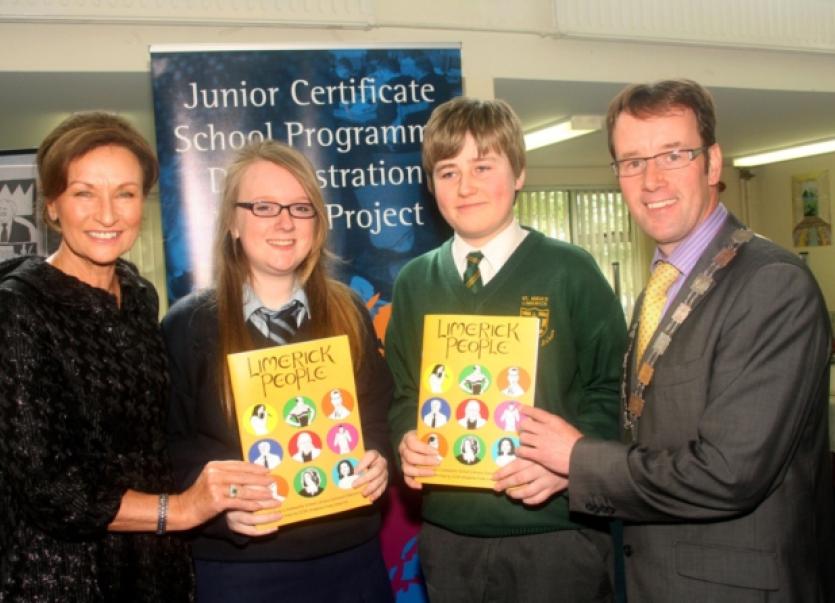 THE life and times of 14 giants of local life have been profiled as part of a new book written by students from Limerick.

THE life and times of 14 giants of local life have been profiled as part of a new book written by students from Limerick.

Almost 30 students from schools in the city and county who are taking part in the Junior Certificate Schools programme got together to profile some of the great and good in Limerick.

The book will be on sale in bookshops later this month.

Attending the launch, style icon Celia Holman-Lee - one of those profiled - said she was very impressed with the students work.

In particular, she praised Southill student Kourtney Fitzpatrick, who not only profiled the agent, but also cooked some cakes with candy shoes in her honour.

Celia admitted that when she was at school, her teachers told her that her “brains were not in her head, but in her feet”.

She said she wished this initiative had been around when she was in education.

“Anything which encourages people to read, write, or look up their history on anything to do with the city is absolutely incredible,” she said, “This is fabulous. It is a great idea and a great learning curve for people who don’t know how much Limerick people do.”

Students from Desmond College, Newcastle West, Colaiste Na Trocaire, Rathkeale, Ardscoil Mhuire and St Nessan’s Community School were in attendance at St Enda’s School library for the launch, having all contributed to the collection.

Praising the students, St Enda’s principal Gina O’Connor said: “We hope today will inspire you to go on and write yourselves, read yourselves, and enjoy [literature] at whatever level you take it on.”

She added: “Limerick has a huge tradition of many famous writers. Frank McCourt would be one, our own former student John Breen would be another one, and there are lots and lots of others. They started somewhere, and a lot of times it was in school in the library.”

Deputy Mayor Joe Leddin added: “Publications like this do not happen by accident: there is a tremendous amount of work and attention to detail which goes in by everyone involved. You can all be justifiably proud of this book, and I have no doubt that this book will find the shelves of people right around the world, not just Ireland.”

Jane Bingham-Shee, St Enda’s School Library, said the project was put in place to help students be more proud of their Limerick heritage, as well as learn more about the history of the people in the city.