Mary B Keane’s story of love that lasted a lifetime 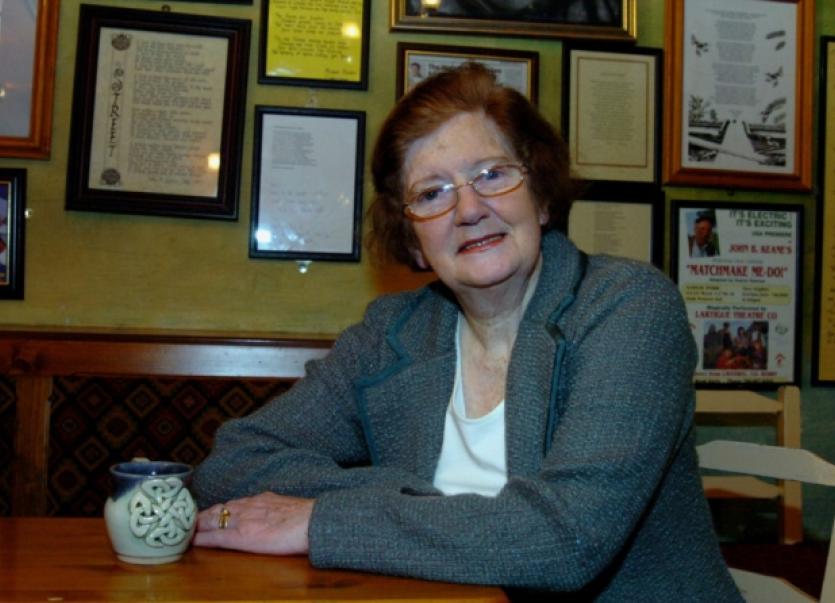 A RARE and touching love story that endured more than six decades came to a graceful close at the weekend with the passing of Mary B Keane.

A RARE and touching love story that endured more than six decades came to a graceful close at the weekend with the passing of Mary B Keane.

It was a love story which began in Listowel long before her husband John B Keane became a household name and later an internationally recognised writer.

And it was a love story that continued even after his death in 2002.

“Now that he is gone, I miss him a fright,” she said, in an interview with the Limerick Leader in 2008 to mark the return of John B’s old columns to the newspaper.

“We were together a long time, but it seems awful short now. We had nearly the 50. I used to ask him what would we do for our 50th. He never did answer me. He knew himself it was over. He was fierce fond of me. He kissed me every day. We were very close.”

And she spoke then of the night that she, a young hairdresser from the parish of Knocknagoshel, met the man who was to become her life partner.

“I was foolish enough to come to Listowel to the races and there I met him,” she recalled.

“I didn’t know until after that he had a bit of a name as a writer, as a poet. Everyone and anyone that time would go dancing. There was one big dancehall in Listowel where Mick Delahunty and Pat Crowley used to play. They were the bands of the time. That was a great treat to have an orchestra.

“He asked me to dance. It was crowded, so crowded we barely got on to the floor. When the dance ended, he asked me: ‘Will you have a bottle of orange?’ And I thought to myself, this fellow can’t be that bad. We kept dancing and I got to like him.”

Then “this eejit from Castleisland”, a man who had never before invited Mary on to the floor, cut in during an Excuse Me dance. But if he did, John B “excused him back”.

And somehow that was that. Not long afterwards, John B had a poem published in The Kerryman in which Mary was mentioned. That was how she found out he then was a writer. And then came the daily letters.

“He wrote to me every day, every single day,” she said. “But I never kept them.”

“John was great. If he wanted something he went after it.”

And Mary was, most definitely, what he wanted, though Mary’s friend and landlady, Julia, worried he was a bit slow in putting the question forward.

Eventually, however, the question was put, or at least understood, and the two married in January 1955 and three or four weeks after, moved into the bar in William Street that has since become known the world over.

At that time, John B was a chemist’s assistant and the couple had to borrow money for the pub venture.

“It was a massive move,” Mary recalled but added: “I knew about borrowing but John didn’t. I was the one who had the head for business.”

And she was, of course, right. Mary did a superb job of running the business and her happy household of husband and four children, always making sure John B had the time to write, usually late at night when the pub closed.

She often fell asleep, lulled by the sound of his pencil tapping on the table and knowing he was doing what he wanted and needed to do.

She had her own distinctive style; forthright, direct, a woman of character and opinion but with a countrywoman’s warmth. And she had a lot of sayings, as her daughter Joanna said at her funeral on Monday,

But above all, she was her own woman.

And she shared an equal partnership with her husband. When John B was approached by the Limerick Leader to write a column, he said firmly that he would have to consult Mary, who was, to the great delight of thousands of readers, happy to give it her imprimatur.

Indeed, she was a great source of stories and snippets for him, taking delight in sharing them with him when they drove out, every Sunday afternoon, to Ballybunion or Beale or into West Limerick. And it was she who would put the column in the post each week for more than 30 years.

Her own colourful turn of phrase, wrought and spun from the uplands of Knocknagoshel, kept John B rooted to the language and rhythms of those he wrote about.

And it was Mary above all others who shared in his pain when his play Sive was rejected by the Abbey in 1959 or in the early days when critics snobbishly dismissed him.

“He would pretend they weren’t affecting him. He felt it, though,” she recalled.

She also shared of course in the triumphs, the gala opening nights, the Oscar nominations for the film adaptation of The Field, the parade of big names to their door.

And together, they took fierce pride in their children, Conor, John, Joanna and Billy and later in their grandchildren.

A woman who loved fiercely and well, she loved, above all, the times she spent with her John. Just the two of them. A rare love story.