Limerick’s armchair poets all set to tour the country 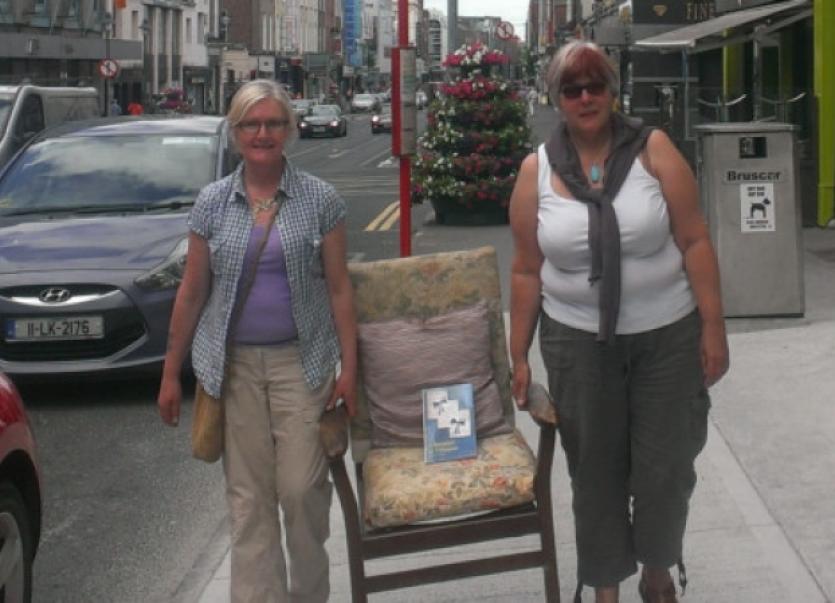 EAGLE-eyed folk may have spotted an armchair popping up across the city in recent weeks, as part of a unique poetry initiative.

EAGLE-eyed folk may have spotted an armchair popping up across the city in recent weeks, as part of a unique poetry initiative.

Poets Sheila Fitzpatrick-O’Donnell, Thomondgate, and Dr Bridget Wallace, Cathedral Place, are planning to tour the country with an armchair in a bid to promote poetry and creativity.

The hope is that the chair- designed for the inside of a house - will spark people’s curiousity, and they can then engage in reading.

So far, the chair - plus Bridget and Sheila - have visited O’Callaghan Strand, the Treaty Stone, King John’s Castle, St John’s Square, as well as a busy bus stop in the city where people were willing to delay their journey home to recite poetry.

“The public have been very responsive. We thought people would shy away from the idea, but the opposite has happened. It is essentially a celebration of poetry, a democratisation of poetry,” Bridget added.

Even as the Limerick Chronicle interviewed Sheila and Bridget on O’Connell Street at teatime this Monday, four passers by asked to sit in the seat and read their poetry, or share their thoughts on life.

The chair was sourced from a bric-a-brac shop formerly operated by Sheila at the Watch House Cross, Moyross.

“I was sitting in the chair in Sheila’s shop recently, and unfortunately it was time to go home,” said Bridget, “But Sheila said: take it with you. It was a lovely fine evening, so we put it out by the river”.

The idea gathered legs after a passer-by struck up a conversation with the pair.

As well as allowing the public an outlet, there is also an opportunity for the poets to sell their work to passers by.

Sheila said the chair is used as a metaphor, an identifier as to who is interested in poetry.

“A guard or a nurse, has a uniform on them. You can tell what they do: this is their job. But how many poets are there? There may be 10,000 people going to a Munster game. Of those, at least two or three will actually be into poetry,” she asked.

The pair have taken the chair to a few places outside Limerick including Coole Park in Gort, Co Galway.

In the coming weeks, it is anticipated they will go on a tour of the country with the armchair.

Starting from the Limerick City library at the Granary building, Michael Street, they plan to travel to all local libraries across Ireland to offer people the experience of reading poetry from the chair.