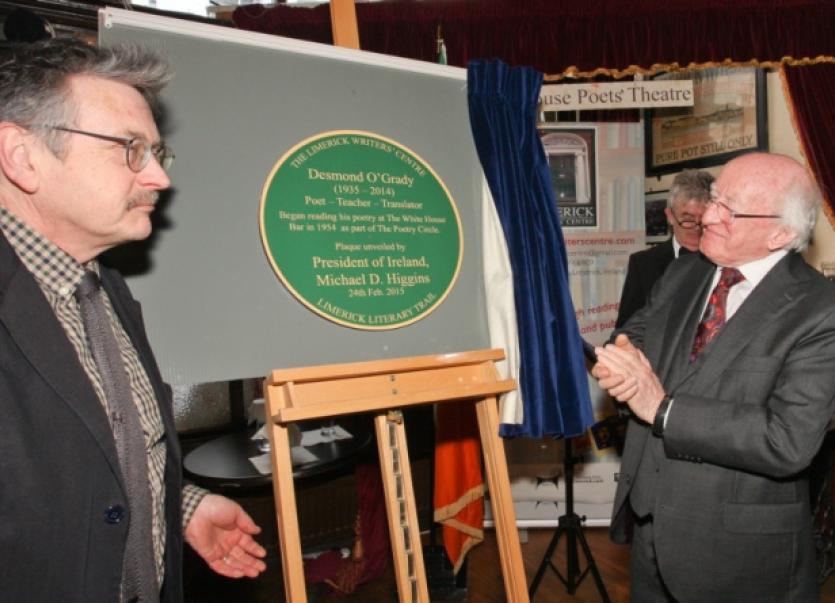 IT was in the White House Bar on O’Connell Street some 60 years ago that a fledgling poet gave his first reading.

IT was in the White House Bar on O’Connell Street some 60 years ago that a fledgling poet gave his first reading.

Desmond O’Grady, who would go on to become one of the “senior figures of Irish cultural life,” as Seamus Heaney described him, was also a staunch supporter of the long running White House poetry nights, resurrected by Barney Sheehan over a decade ago.

Fitting then that President Michael D Higgins, a friend of the Limerick poet who died last year on the eve of his 79th birthday, would accept an invitation to visit the city pub and unveil a plaque to O’Grady, in front of a large collection of his family, friends and fellow poets.

President Higgins recalled “getting postcards from him from different places”. An emigrant poet who left Limerick in 1961, Mr O’Grady worked as a teacher and writer in Rome, Paris and Cairo.

“There was a number of us that he would send these cards to, and Limerick has every reason to be very proud and it is a pleasure to be here,” said President Higgins on his way into the event this Tuesday.

The event was organised by the Limerick Writers’ Centre as a tribute to the Limerick poet whom, in his speech, President Higgins said was “great, warm and wonderful” and had a “flair for life”.

“Desmond O’Grady’s commitment to poetry and to the arts in general, and his contribution to the cultural dimension of Irish society, was immense,” he said.

“His legacy is a great and enduring one and he will be remembered as a gifted poet, an intuitive translator and of course as a generous friend to Ireland’s artistic community through his active role in the founding of Aosdána.

“He remained loyal to the county of his birth, and indeed to the White House Pub where he gave his first reading sixty years ago. “I know he was an enthusiastic patron of the weekly readings which have been held here for over ten years and was, indeed, the first guest at the White House poetry night in 2003.”

Unveiling the plaque, the President added: “It is uplifting to know that, just as he did not forget Limerick, Limerick has not forgotten him.”

Speaking to the crowd, Desmond’s son Leonardo said it was a “great honour” to see the plaque unveiled.

“I have to say that Desmond, while being international, has always been definitively a Limerick man.”

Three students from UL read poems in Italian, Arabic and Greek - as well as English - to mark O’Grady’s prowess as a translator of literary works, while Dominic Taylor of the Writers’ Centre said the plaque would add to Limerick’s growing literary trail.

“Desmond has often been considered an outsider in Irish poetry, he left at a very young age in 1961 and he had been forgotten about to a certain extent,” he said.

“We felt that, if we didn’t do something immediately when he departed us, that it would never have been done and he would have been totally forgotten.”