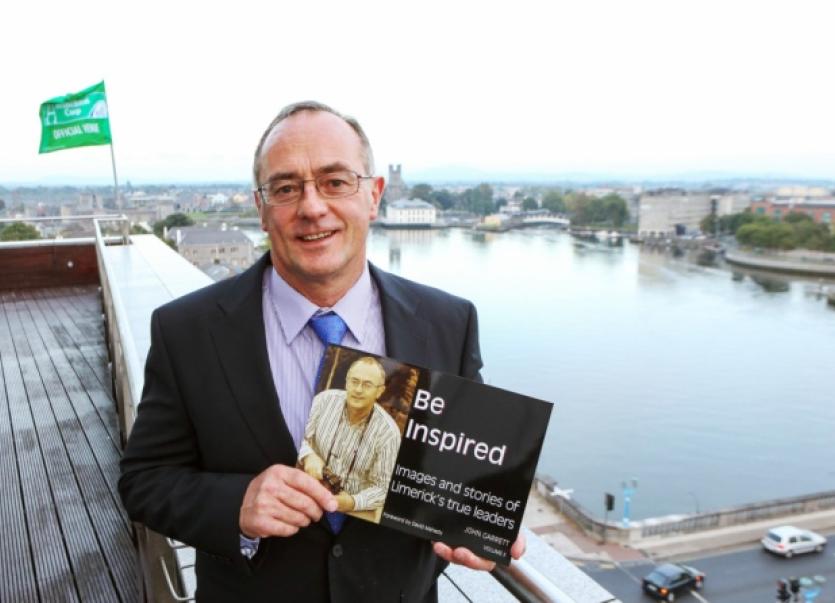 A LOCAL photographer has published a second volume of images that promote Limerick from the “inside-out”.

A LOCAL photographer has published a second volume of images that promote Limerick from the “inside-out”.

John Garrett, who is responsible for compiling the collection of ‘special photos’, entitled Be Inspired - Images and Stories of Limerick’s True Leaders, said the second volume pushes Limerick in a number of areas.

“Two years ago I did volume One of the Be Inspired book. The whole idea of it was to promote Limerick and to show that Limerick pushed beyond and above its weight, in terms of humanitarian issues, sport and culture,” he explained.

“I wanted to publish another volume, which was this one, and really push the inside-out of Limerick. I made contact with a friend called Des Langford and I asked him if there was anything iconic he could put in Limerick to really show it off and to create an attraction. For example, in the States you have the Statue of Liberty. So he came back to me with a few sketches and they really showed the seeds that could be used in the city centre.”

Mr Garrett said the publication, launched in the Strand Hotel last week, features exclusive sports photos, including the Olympian Reunion at the Clarion Hotel in May 2012. International junior hurdler Sarah Lavin is also featured in the book.

“I spent a weekend taking photos of the Paddy Power Amputee Football competition, where Ireland, England, Germany, Poland, Holland and Belgium played against each other. They want Limerick to host the World Cup in 2016, so I told them I would try and back this by taking photos.”

He said his photos of Senator Edward Kennedy’s visit to Limerick 1964 show that “Limerick still remembers the Kennedys” and added that it is a special photo to him.

“We can promote Limerick very simply, and I know Limerick is world-class and I am trying to show that in this book,” said John.

“I am a strong believer that if you have a photo of you doing something special, you will be able to repeat that performance and regain your strength in the future.”