Limerick paediatrician’s account of life on the front line 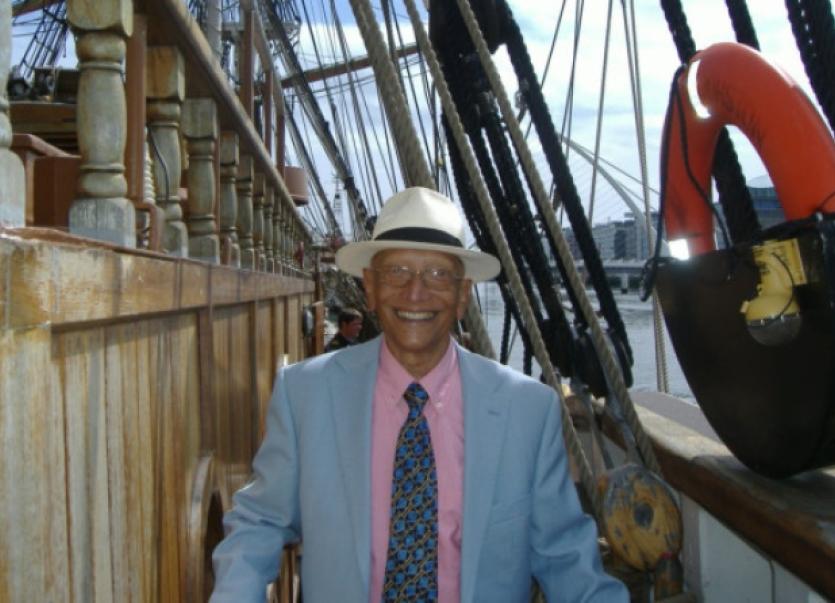 BASH’S Ashes. That was the title a colleague jokingly suggested for the life story of Dr SM Basheer, former head of paediatrics at University Hospital Limerick.

BASH’S Ashes. That was the title a colleague jokingly suggested for the life story of Dr SM Basheer, former head of paediatrics at University Hospital Limerick.

“I used to examine in the Royal College of Surgeons. It was shortly after Frank McCourt had brought out his book when Denis Gill, a professor of paediatrics, said to me ‘Look Bash, you are in Limerick. Why don’t you write your memoirs and call them Bash’s Ashes?’ I said I’d think about it but I had no pretensions of being Frank McCourt,” he says at his home in Castletroy.

But approaching his 80th birthday next month, the retired consultant has indeed finished his memoir. Only it’s not called Bash’s Ashes. That remains a trophy golfers from the paediatric units around the country compete for. The book is entitled Snakes to Shamrock: From Uganda to Ireland, A Journey Untold and he says he wrote it because his family - even his own children - didn’t know his full background.

SM Basheer was born in Uganda in 1934, the second of 15 children. That only nine survived in a family wealthy by African standards is a measure of the shocking child mortality in those days and something he acknowledges that may have been an influence on his later choice of career.

The biggest influence was his father, who was born in pre-partition India, joined the British Colonial Service after qualifying as a doctor and was posted to Uganda in 1925. His mother was a Muslim from near the Sikh stronghold of Amritsar and “all her family were literally wiped out” in the sectarian massacres of 1947 that led up to partition. And so it was to the new country of Pakistan that Dr Basheer Sr took his family on a trip home in 1950.

“My mother used to have bad asthma and during the winter months in Pakistan, it can be very cold. Uganda is hot so within three weeks, she got pneumonia and died,” he recalls.

With “no university in all east Africa”, a 17-year-old SM Basheer returned to Pakistan in 1952 to take a bachelor of science in Lahore with the intention of entering a medical school. But his older brother Sadik soon persuaded him to join him in London.

Having passed the GCSEs with flying colours, the young student was met with the type of discrimination he would encounter repeatedly. Not that the good-humoured doctor seems in any way bitter.

“When I applied to all the medical schools in Britain, I was told I was from the colonies and had better go to the Colonial Office. They told me they had already 500 colonials on the waiting list, that I would be the 501st and I had better try another profession,” he recalls.

It was through a friend of a friend of his father’s that this resourceful colonial found a place in the Royal College of Surgeons in Dublin.

“I arrived on September 29, 1955. I qualified in 1961 and I had all my training in various Dublin hospitals before I eventually ended up a consultant paediatrician in Limerick in 1973. I retired officially in 1999 when I turned 65 but they asked me to stay on as locum and, would you believe it, my last day at work was 9/11.”

In between were plenty of dramatic episodes and life-saving interventions.

Dr SM Basheer was only in Limerick a few months when a baby with an obstructed bowel was admitted. “The general surgeon was the late Michael Murphy – a brilliant surgeon – who said to me the child was moribund. We couldn’t transfer him to Crumlin because he needed a blood transfusion and wouldn’t survive the journey.”

The problem was that the baby’s parents were Jehovah’s witnesses.

“So I contacted the solicitor for the health board, Billy Leahy. He said to me I’d be in serious trouble if I gave a blood transfusion to a Jehovah’s Witness and I had better call the attorney general. The AG was Declan Costello, who asked to put me on the phone,” he recalls.

The AG gave his assent.

“We gave him the transfusion and he survived. But the parents actually never came back. We had to give the child to social services for adoption. I will always remember it,” he says.

Another patient he will never forget was the two-year-old girl who arrived in the hospital in acute liver failure at around 8pm on December 31, 1999.

“It was the night of the millennium bug when all the computers and planes were supposed to shut down. The only way to save her was a transplant in 24 hours.”

Dr Basheer called St Vincent’s to be told no liver was available. But one did become available in Brompton Hospital in London.

“They said we want the child here before 4am. We rang Shannon Airport. Closed down. Nothing. And it was actually the Air Corps when I rang them up who told me they could fly her over to London, which they did. The child did come back through Shannon on the way home on April 1, after surviving and doing very well - and I believe she is still doing very well 14 years later.”

In many ways, the children of Limerick have things better today than in Dr Basheer’s day. They have more consultants and better accommodation. For much of Dr Basheer’s career, his patients were treated in the Maternity, in St Camillus’, in Croom and “scattered all over” the Regional Hospital.

“Many a time I remember coming home only to be told I had missed a child in ENT or a surgical ward.”

It was largely Dr Basheer and his colleague, Michael Curtin, who had brought Health Minister Michael Noonan around to the idea of building the Children’s Ark. Today “it is one of the best units in the country”.

Trolley waits in the emergency department were “not a feature” during Bash’s career either. He was himself left waiting for hours to be seen in the A&E recently until a porter recognised that this was the man who had devoted 30 years of his life to the hospital.

For all that, the good doctor says Limerick has been good to him although his wife Jean was so horrified at the prospect of moving here in 1973 “that she actually cried”.

“Limerick had an awful reputation even then as somewhere culturally backward. Brendan Behan had made some remark and journalists were writing it was best seen in a rea- view mirror.”

Jean came to enjoy Limerick more after taking up golf nearby in Castletroy, where she remains a popular member.

As for being culturally backward, Limerick was more than accepting of “the first black consultant in Ireland” as Dr Basheer believes himself to have been.

He had gone for such a post in the Coombe when a consultant on the interview board haughtily asked: “Do you think that Irish women would like to go to a black consultant?”

“I had all the qualifications and, in temper, I actually walked out. The next consultant post that came up was in Drogheda, which was run by nuns. When they heard the name Sheikh Mohammed Basheer, they said they didn’t want a Muslim working for them, so I didn’t get the appointment there either,” he recalls.

In Limerick, he was encouraged to apply.

“And I found in fact that the people here were so nice and I have never encountered any racial prejudice,” he says, hand on heart.

He also recalls prejudice when, hoping to visit Uganda in 1968, he sought to renew his British colonial passport. A snooty official in the embassy again referred to his colour and demanded to see his parents paperwork. He explained that his father was an MBE and his mother had been dead for 16 years.

A “disgusted” Bash returned to Harcourt Street, then site of the National Children’s Hospital, where a colleague suggested he apply for Irish citizenship. All he needed were two Irish citizens to vouch for him. The chairman of the hospital board was Mrs Kingsmill Moore, whose husband sat on the Supreme Court. And Bash also knew a son of Eamon De Valera’s lecturing in UCD - then down the road at Earlsfort Terrace. Using these connections, Dr Basheer managed to get his passport application signed by a Supreme Court justice and the President of Ireland!

“Two detectives came to visit me. They thought I had forged the signatures,” he laughs. But within three weeks he had his passport and Bash has been travelling as a Paddy ever since.

His final visit to Uganda came before the 1971 coup which brought Idi Amin to power. He had deposed Milton Obote, whose Longo tribe stronghold was based around Lira, where Dr Basheer Sr lived. Bash’s father was actually offered a position as Minister for Health by Obote.

“Just as well he turned it down because when Amin took over, he assassinated most of the ministers,” he says of a dictator whose methods included feeding political enemies to the crocodiles.

Amin infamously gave Uganda’s entire Asian population 90 days to leave but Bash’s father and brother were asked to stay on. Amin did not trust Longo doctors but did trust Dr Basheer, even bestowing him with honours. Sadik Basheer, who worked in the national film unit, was forced to stay for Amin’s propaganda.“But the rest of my family - my sisters, brothers, everyone - were all expelled.”

No longer “famous for being the only black doctor in Limerick”, Bash is still recognised by parents whose children he treated. When a couple he met on the train once thanked him for his care he - “like a stupid idiot” - asked how the child was only to be told he had died.

“Since then, I never ask. I go to the supermarket and people ask if I am Dr Basheer but I never ask. I let them tell me and usually I’m relieved to hear that he is 33 now and in Australia and married with children.”

His own children are also doing well. Nigel is a specialist in paediatric neurology in London; Bruce runs his own business and Sarah works as a nurse in the coronary care unit at University Hospital Limerick.

“That was against our wishes. It was on the day she qualified as a teacher she informed Jean and I she wanted to take up nursing. I told her not to because I knew how hard the nurses worked,” he says.

But if time allows, Sarah can now read the full story of Bash’s Ashes.

Snakes to Shamrock: From Uganda to Ireland, A Journey Untold is available on Amazon.co.uk as Kindle download, for £2.55.