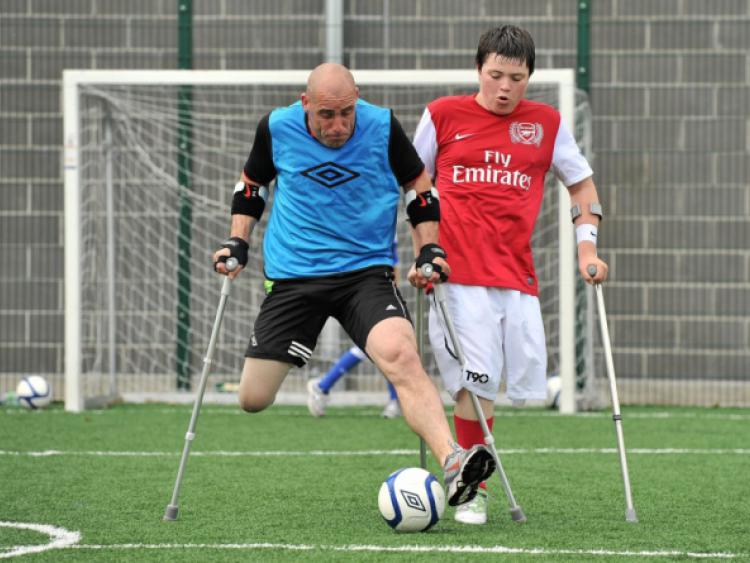 OVER 100 amputee footballers from across Europe will descend on Limerick this August for a two-day football tournament unlike any other.

OVER 100 amputee footballers from across Europe will descend on Limerick this August for a two-day football tournament unlike any other.

Six countries will battle it out on the pitch for the Paddy Power Cup in the University of Limerick, with the aim of raising the profile of amputee footballers and amputee athletes in general.

This will be the first International Amputee Football tournament ever played in Ireland, even though amputee football has been growing for more than 20 years in America.

“We’re doing this because we want to get rid of the disability label and be seen as serious sports people. We’re serious athletes, not just amputees. We want to showcase who are we,” Simon Baker told the Limerick Leader.

“We are really promoting Limerick with this tournament, and the president of the World Amputee Football Association is coming over from America to see what we have to offer. We hope to bring the amputee football World Cup to Limerick in 2018, after Mexico in 2014,” he explained.

Simon, a world record breaking amputee athlete and chairman of amputee football in Ireland, said the tournament will see teams from England, Poland, Netherlands, Germany and Belgium take on Ireland.

In all, 116 amputee football players will be in Limerick for two days of “fast, high tempo, highly skilled football”, he said.

“We’re trying to steer clear of the disability label. People really have to see this game in action. A lot of people are amazed when they see what a fast paced game it is,” he said.

Earlier this year, in preparation for the tournament, Simon led two amputee teams on crutches through the Great Limerick Run relay team, each covering 10km. He also made the Guinness Book of World Records in 2008 for the fastest marathon completed on crutches and one leg, which he set in the Dublin Marathon in a time of six hours 42 minutes.

Simon himself will be playing for the Irish team, alongside local man Patrick Hickey, from Pallasgreen, who also completed the relay race on crutches this May.

As the chairman of the Irish Football Amputee Association, Simon’s aim is to take a step back from being on the playing pitch, and to promote sports and activity for amputees, and also to provide any person with an amputation, congenital deficiency, or other limb affecting disorder the opportunity to access Amputee Football at grassroots, club and national level.

The tournament runs over two days on August 10 and 11.It will start at 10.30am on Saturday morning, and each team will play two games on Saturday and two games on Sunday, with the Paddypowers.com cup presented to the winning team after the final.