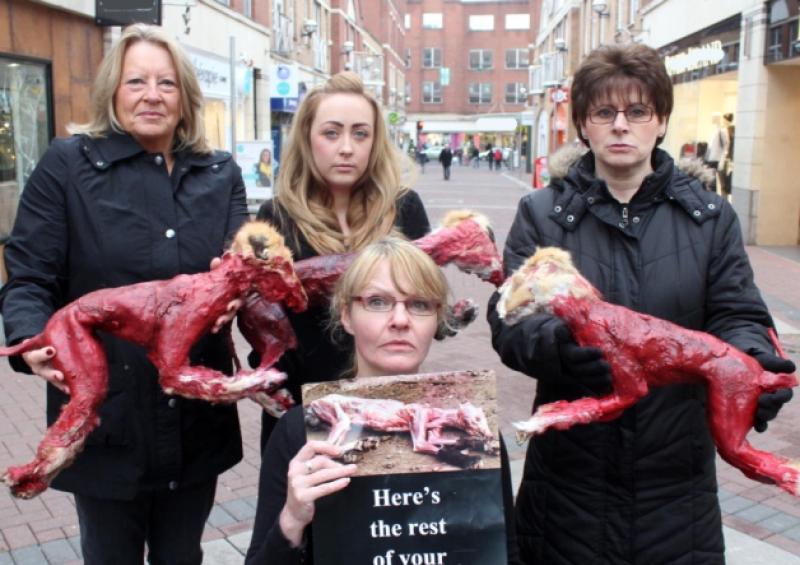 “FUR is murder”, chanted animal rights activists on the streets of the city this week, as they urged people to be aware that even fur labelled as fake could in fact be real.

“FUR is murder”, chanted animal rights activists on the streets of the city this week, as they urged people to be aware that even fur labelled as fake could in fact be real.

John Carmody, and other members of ARAN (Animal rights action network) carried replicas of skinned aniamls on Cruises Street and O’Connell Street to highlight their message.

“We’re showing people here today a snapshot of this industry, and telling people that you can get that killer look if you want to keep warm, without using the skin of a dead animal,” he told the Limerick Leader.

As fur - both real and fake - makes a comeback on the streets and catwalks, he advised people if they have a doubt about an item of clothing not to buy it.

“The fur industry for many years have been on the defensive, and have started relabelling real fur as fake fur. For years wearing real fur became a public liability, but now fur is being sneaked into to trinkets and gloves, and jumpers, and anything you can get a fur look. Our message to consumers if in doubt stay away from it.

“A lot of people are genuinely shocked when they see the bodies of dead, skinned animals. It’s bringing home the reality of where the fur really came from,” he said.

Citing the influence by celebrities, such as Kanye West, who has stepped out in a $7,000 fur coat, he urged people to be ethical in their purchases. “Over two million dogs and cats are killed in China every year [for their fur], and we’re trying to show people that dogs and cats are used as well. We think it’s an important message at this time of year as it’s really, really cold. Campaigners’ discomfort here is really nothing in comparison to what animals on fur farms go through,” he said.

Another protestor Pat Moran, from Monaleen and a member of Limerick Animal Welfare, said: “The fur industry would have you fooled, thinking animals are all gassed first of all, but they are literally skinned alive. There’s plenty of man-made clothes people can wear instead.”