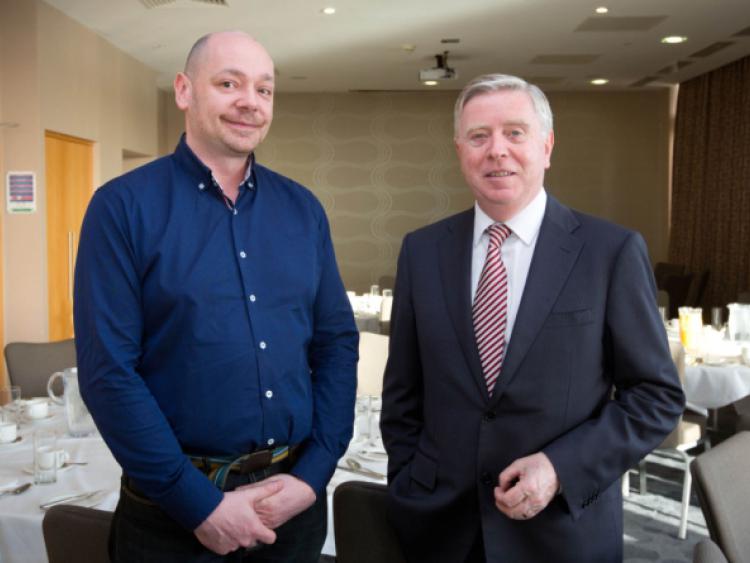 THE CHAIRMAN of Limerick City of Culture has sensationally revealed that the resignation of their artistic director followed a performance review of his work to date on the project.

THE CHAIRMAN of Limerick City of Culture has sensationally revealed that the resignation of their artistic director followed a performance review of his work to date on the project.

Artistic director Karl Wallace, who was appointed in March and is a former director of the Belltable Arts Centre, is the third person to resign from his role in recent days, along with international programmer Jo Mangan and commissioning and legacy programmer Maeve McGrath.

Speaking on Limerick’s Live 95FM this morning, Pat Cox, chairman of Limerick City of Culture, said the board had a “very lengthy meeting” in early December, during which a number of issues were raised, including a performance review of Karl Wallace’s work to date.

He said Mr Wallace’s resignation followed a performance review requested by the board, after which he claimed Mr Wallace failed to attend follow-up meetings due to sick leave and holiday leave.

“Such a review was undertaken. For a combination of reasons, to do with holiday leave and sick leave, the artistic director was not in a position to make himself available through the month of December when these issues were raised with him to discuss any of the matters, with any of the personnel who would be relevant to such discussions, and he subsequently decided on his own part to submit a resignation. I think it’s dated December 30, submitted to Limerick Corporation.

“In the light of the discussions that the board had and the many issues that were considered by the board, a performance review was requested and one was carried out. I am not familiar with the internal details of that, but I am aware that meetings were sought between the employer and Karl Wallace, and that those meetings did not take place.”

He said the performance view was carried out by the human resources/personnel department in Limerick City Council.

Asked if Mr Wallace’s resignation was a result of a breakdown in communications with Patricia Ryan, CEO of Limerick City of Culture and a former advisor to Mr Cox during his time as an MEP in Brussels, Mr Cox said “it’s a lot more complicated than that.”

He said the announcement of Mr Wallace’s resignation, just two days into Limerick’s pivotal year as the first Irish city to host City of Culture, is “certainly an important matter for City of Culture and I don’t underestimate it”.

He said the board will be “calm and deliberative in our response in how to deal with this [resignation]”, but expressed confidence that the year will be a success.

“We are absolutely satisfied that we have the capacity and will have the ability to put on a successful programme, as witnessed already by the excellent launch event we had on New Year’s eve, of the sort Limerick city has never seen on its streets.”

He said the board is due to meet again this month, during which they will “calmly review what gaps we have, if any, and how best to fill them”.

Mr Wallace told the Irish Independent: “While I regret making an early departure, I can no longer stand over a project that I have concerns about, concerns that have been repeatedly aired but not addressed.”

“From May onwards, I outlined the necessary staffing structure to deliver the programme including positions such as a technical manager, education and outreach advisor, operations manager.

“As we progressed, it was very clear that those requests were not going to be honoured and also that there was a lack of basic understanding and arts expertise of the structure that is required to make a project like this work,” he added.

Gill Fenton, of the Lime Tree theatre in Mary Immaculate College, said the arts community was “dismayed” to learn of Mr Wallace’s resignation.

Former mayor of Limerick, councillor John Gilligan, said he was “very disappointed” by the resignation and was “horrified that he [Wallace] wasn’t involved in the opening ceremony” on New Year’s eve.

“The fact that he was sidelined says things were not going the way they should have been. It’s a huge blow to our city,” he said.

After the lengthy radio interview this Monday morning, the following statement was issued by the organisers of City of Culture.

It reads, in full: “The board of Limerick National City of Culture 2014 has today confirmed that artistic director Karl Wallace has tendered his resignation and that two other non-staff programmers, Jo Mangan and Maeve McGrath, have indicated their intention to terminate their contracts.

Commenting on the resignations, board chairman Pat Cox said, “We would like to thank all three for their contribution to Limerick National City of Culture 2014 and wish them well in their future careers.

“We have just enjoyed a hugely successful New Year’s Eve launch and are immediately looking forward to our January flagship event, the six Riverdance shows at the UL Sports Arena, which have exceeded all expectations in terms of ticket sales at this stage.

“With over 100 events set to take place in the first quarter of the year alone, including also the stunning Fuerza Bruta in March, we have an edgy and modern programme already in place, and more to announce.

“We will be taking stock of resourcing requirements in light of these decisions and will strengthen our team accordingly. In the meantime, our focus will continue to be on making sure the momentum already built up and the value and entertainment level for all attending events across Limerick this year is at the highest possible level.”