Regular festivals ‘must be held to draw thousands’ to Limerick 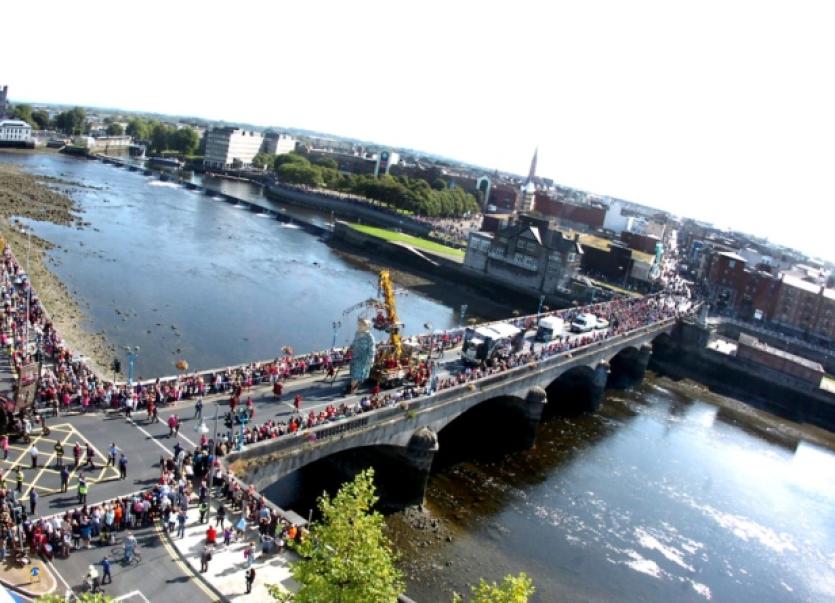 A FESTIVAL must now be held in the city centre on a monthly basis to build on the massive success of the Giant’s Journey.

A FESTIVAL must now be held in the city centre on a monthly basis to build on the massive success of the Giant’s Journey.

That’s the view of Sinn Fein councillor Maurice Quinlivan, who believes that parts of the city centre should be closed to traffic in order to bring tens of thousands of people into the city once again.

The suggestion has been given a cautious welcome by Strand Hotel boss Sean Lally.

Speaking in Shelbourne Park on the city’s northside after the giant had completed her journey for day two, Cllr Quinlivan said: “What we need to be doing is using our resources, perhaps on one Saturday each month, to have a festival in the city centre”.

Mr Lally said: “The more events we have in the city the better. Everyone gets a benefit from it. But you have to be careful that you do not damage the impetus of the retail trade in the city.”

The northside councillor decorated his window, which faces onto Shelbourne Park, with the words ‘Hello Gran’.

Looking further ahead, he said there must be something on a similar scale in the city next year.

“The legacy of the City of Culture has to be that we do something like this again next year. It is probably the best thing that has happened in Limerick in my lifetime. I am very proud to be a councillor on a weekend like this. Thousands of people are very happy, there are thousands of people here in Shelbourne Park.”

On her journey through Limerick, granny also settled in the Lee Estate, taking in the King’s Island, Thomondgate and Kileely in the process.

There was also extreme pride in the Lee Estate, that the giant settled in an area previously ravaged by flooding.

““This is something which will be recognised all over the world, that she had a snooze for a couple of hours this afternoon on our green,” Independent councillor John Gilligan said.

Mr Lally - whose hotel was fully booked - said the weekend offered “a fantastic showcase for Limerick”.

“Limerick put its very best foot forward when the eyes of the world media were on the city. I think we were blessed with extreme good luck weather-wise. I think it was one of the best weekends of the summer weather-wise, and to have it going way through the weekend, it meant it was exceptionally positive,” he said.