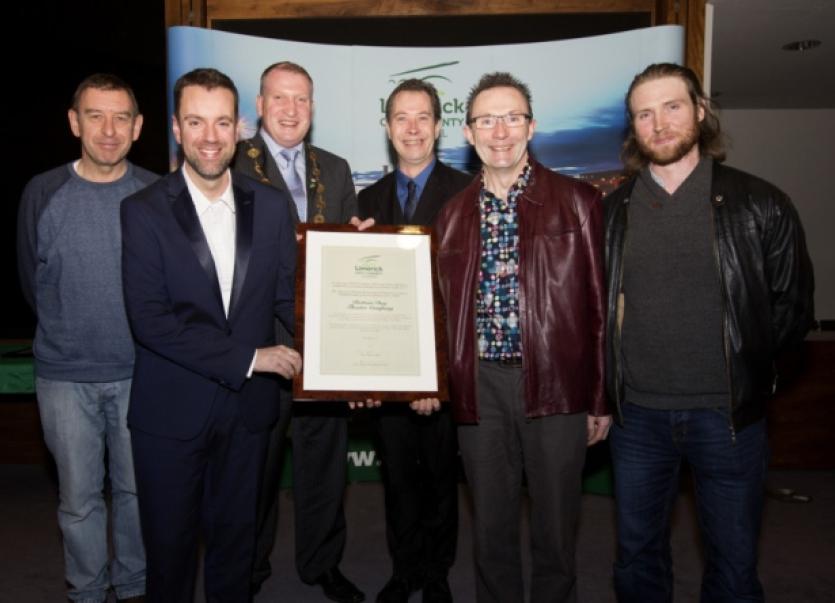 Both the well known and popular local actor and the theatre company he co-founded in 2009, Bottom Dog, were recognised with a civic reception in the City and County Council chamber last Wednesday evening.

The honour, proposed by Fine Gael councillor Daniel Butler, was awarded in recognition of Breen “being a wonderful ambassador over many years” and Bottom Dog’s “contribution to the arts, serving as cultural ambassadors for Limerick both here and abroad,” the council said.

“I was sort of shocked; it is a huge honour for me personally but also mainly for Bottom Dog Theatre Company, because no matter what I have done, theatre is a team effort,” said Myles of the civic honour.

2015 was a memorable one both for Myles and Bottom Dog, with the company bringing the one man show that he wrote, Language UnBecoming A Lady, to the Cell Theatre in New York for the Origin 1st Irish Theatre Festival and its international debut in September.

Breen duly picked up the best actor award handed at the festival –itself founded by Limerick man George Heslin – after a triumphant run in Manhattan, receiving plaudits and ovations in the process.

The tale of an ageing drag queen ranks among the actor’s finest performances, and he poured his heart into the loosely autobiographical story of one gay man’s life growing up in Ireland.

“I did indeed and it was probably the hardest thing I have ever done. There was nowhere to hide really,” said Myles.

“Originally when I wrote it was only supposed to be four performances during Limerick Pride way back in 2009 and it is mad to think that it is still with us.

“It was a huge achievement because we had to fundraise and Limerick people and businesses were incredibly supportive, as were the arts office and chamber. So not only is it a recognition for us, it is also a huge recognition for all those people,” he added.