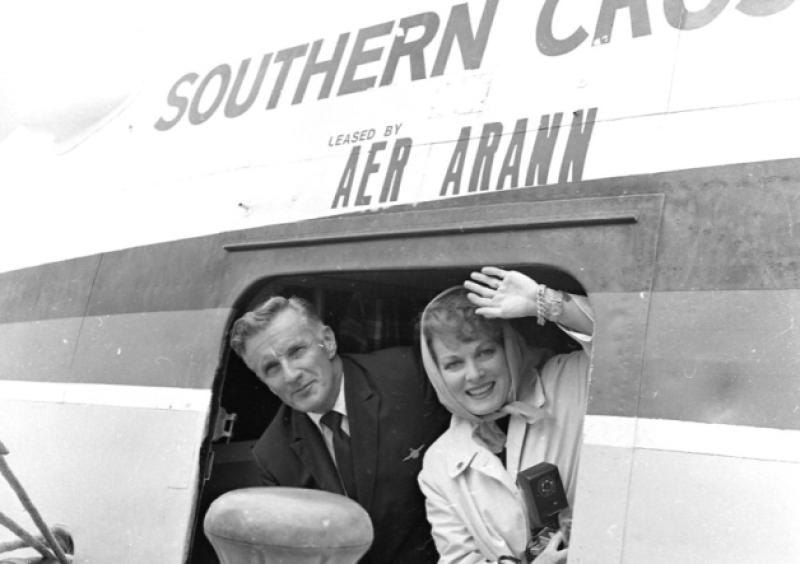 LOCAL journalist Michael Riordan recalls the celebrities that flew in and out of Foynes during the 1940s.

LOCAL journalist Michael Riordan recalls the celebrities that flew in and out of Foynes during the 1940s.

NO publicity, please! It’s not how Ryanair’s Michael O’Leary or IAG boss Willie Walsh would choose to promote a fledgling transatlantic air service.

Nevertheless that was the order that came down from Dublin to Foynes, the home of the new Flying Boat Service, 75 years ago.

An impossible request nowadays with the ubiquitous selfie recording every change in wind direction but in 1940 events could still be hush-hush. Everyone was to be quizzed politely about their journey and military personnel from other nations could not travel in uniform. In wartime, De Valera didn’t want to boast about who was travelling west from neutral Limerick.

It wasn’t just literary luminaries or stars of the silver screen such as Ernest Hemingway, Gracie Fields, Humphrey Bogart and Maureen O’Hara who flew in and out of the stretch of water between O’Brien Island and the mainland.

For some passengers, departing Foynes meant leaving behind a continent of fear. Some escaped fascism through Spain to Portugal then by air to Ireland.

Even Mrs Smith visited Foynes in 1942, though she did not use her real name that of First Lady Eleanor Roosevelt.

When the Yankee Clipper landed on July 9, 1939 to complete the first commercial flight from the US to Europe in one day, it still took eight or nine days to travel by ship.

The B314 seaplane could carry 35 passengers in sleeper accommodation and the dining room could seat fourteen guests. It had an observation deck and even a honeymoon suite.

However fear of invasion meant showing off was off the menu. Flying boats from England en route to Portugal and Africa flew via Foynes to avoid fighters over France. Flights normally arrived at Foynes at dawn and departed as the sun went down.

The glamour and romance of international aviation however could not be subdued. At almost ten thousand euro in today’s money, the cost of the return ticket from the US ensured the passengers landing in Limerick all aroused curiosity.

It wasn’t Rick’s place but the social hub of Limerick then was the Stella Ballroom and Restaurant on O’Connell Street and there was a touch of Casablanca about it. It played host to American and British flight crews in their grey and blue dress uniforms, not to mention our own corps of officers protecting the waterway.

There were Airline Balls and Hunt Balls and New Year’s Eve Galas which all sold out. The lights were burning brightly in Limerick.

The most celebrated flying boat romance of course was that of internationally renowned aviator Captain Charles Blair, a visitor to the Stella, who tested aircraft, flew over the Pole and broke records in his spare time, and Hollywood leading lady Maureen O’Hara. But there were others as well.

Eileen O’Donnell married weatherman Killian Rohan. Her pal Peggy Foran, cashier in her Uncle Dick Lee’s ballroom, married Customs Officer Bill Riordan. But not before he brought her on board to inspect the Flying Boat Caledonia.

Now, aged ninety, she recalls: “It was very plush - like a flying hotel.”

As the threat of invasion faded, plans for the development of the land based Shannon Airport progressed. Peace brought an end to flying boats stirring up wakes and raising clouds of spray at the mouth of the River Fergus.

In stark contrast to the 1940 news blackout, live radio broadcasts were made from the plane into homes across the United States as it crossed the Atlantic. It took just eight hours and twenty minutes.

Bill and Peggy, Killian and Eileen and others who had known the magic of Foynes were at Shannon Airport to greet the future as its wheels touched down.