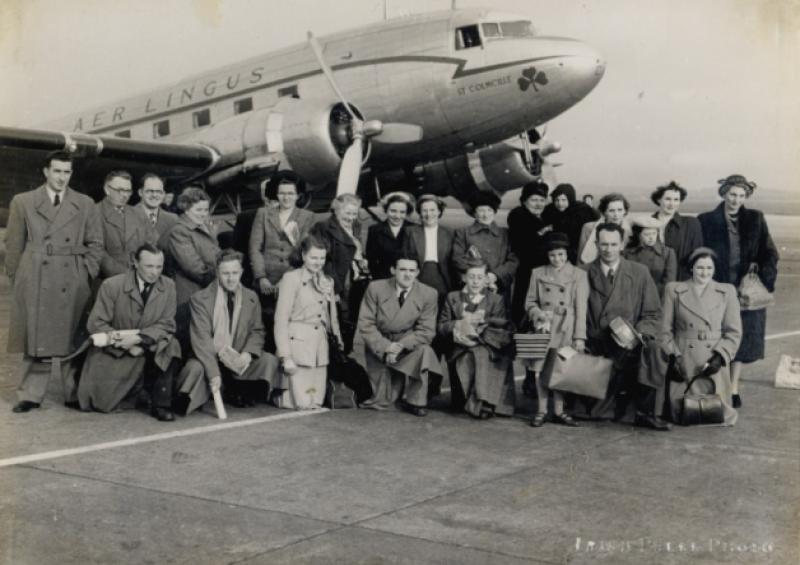 AER Lingus’ connections with Shannon Airport go back to the first commercial flights at Rineanna in the 1940s and the picture published here shows a group of Limerick pilgrims about to board a Viscount aircraft for Lourdes some time in the 1950s.

AER Lingus’ connections with Shannon Airport go back to the first commercial flights at Rineanna in the 1940s and the picture published here shows a group of Limerick pilgrims about to board a Viscount aircraft for Lourdes some time in the 1950s.

The image was handed in this week by Rosemary Gleeson, Ennis Road, whose late brother Michael is kneeling (wearing a striped scarf) in the front row.

The Gleeson family owned the pub on Shannon Street now known as Myles Breen’s and Rosemary was also able to pick out the chemist, Bill Hanley, kneeling to the right of the image with his family.

The trip to Lourdes was arranged by prominent Limerick businesswoman Mirette Hanley-Corboy (no relation to Bill Hanley), who was then working for Shannon Travel. She is pictured in the centre of the back row just under the propellor.

“I used to act as a courier and translator because I had fluent French,” said Ms Hanley-Corboy, Clancy Strand, when contacted this week.

Shannon Travel was based on Cecil Street on the site now occupied by Fine’s Jewellers and had been founded by Derrick Morley, the former owner of Islandmore in Croom, now owned by Sue Ann McManus.

“Mr Morley was a lovely man married to a very beautiful Swiss woman. He wanted to start a travel agency and this man John Moloney was appointed as manager. And they wanted to broaden out and take people abroad. They heard of my interest in French and contacted me,” she recalled. The John Moloney who managed Shannon Travel was also the father of former Irish rugby half-back Johnny Moloney.

Aer Lingus’ business in Shannon, Ms Hanley-Corboy said, had “brought an awful lot of prosperity to the region and it would be very sad to see it go. Shannon was a great hub for the whole Mid-West.

“Lourdes was a huge business back then in a time when there wasn’t an awful lot happening, if you like, and Shannon brought an awful lot of employment to the area.”

With only 100 people working for Aer Lingus in Shannon today, Ms Hanley-Corboy said it was “sad to see it fade so much but who knows maybe it will get better with the takeover.

“I suppose when there is a takeover a lot of promises are made and you wonder when it is all over whether any of them will be adhered to. It is up to us to hope.”

Now retired, Ms Hanley-Corboy herself has had a long and successful career in business. She co-founded Portland Estates with her late first husband Sean Hanley. She would later remarry Limerick businessman Tony Corboy.

During the 1990s, Ms Hanley-Corboy was the first woman president of the Construction Industry Federation and she also holds an honorary doctorate from the University of Limerick.

She said she was familiar with the photograph we publish today and pointed out that among the pilgrims were Olive Cusack, wife of the legendary Limerick fishmonger Rene “and a Mrs Sheehan whose husband had a chain of butchers”.