THERE IS widespread joy across Limerick city and county as more than 2,400 students collected their eagerly-awaited Leaving Certificate results this Tuesday morning.

Numerous principals across Limerick have been enthused to share their successes, as many students have scored in the high-500s and even breaking the 600 mark.

"There are some outstanding results. There will be some students really, really happy with the results.

"Across the board they have done really well. This year's group were really good from the point of view that they worked from first year and that is one of the keys to their success," said Mr Kelly.

One happy young man was Stephen Daly who received 566 points. This included a H1 in Mathematics.

"I had low expectations coming in so to get the results is an amazing feeling. My emotions after the Leaving Cert felt the same as after the pre-Leaving but I jumped massively from the pres," said Stephen, who plans on studying aeronautical engineering in University of Limerick.

And although she expected that up to half of the students would wait to get their results online at 10am, she and other members of staff were on hand to congratulate those who came in to personally collect their results.

The majority walked out without even opening the envelopes, preferring to do so in the privacy of car or home, among them Liam Kennedy from Kilcolman who is hoping to do business in UL.

Brought to you in association with Limerick Tutorial College 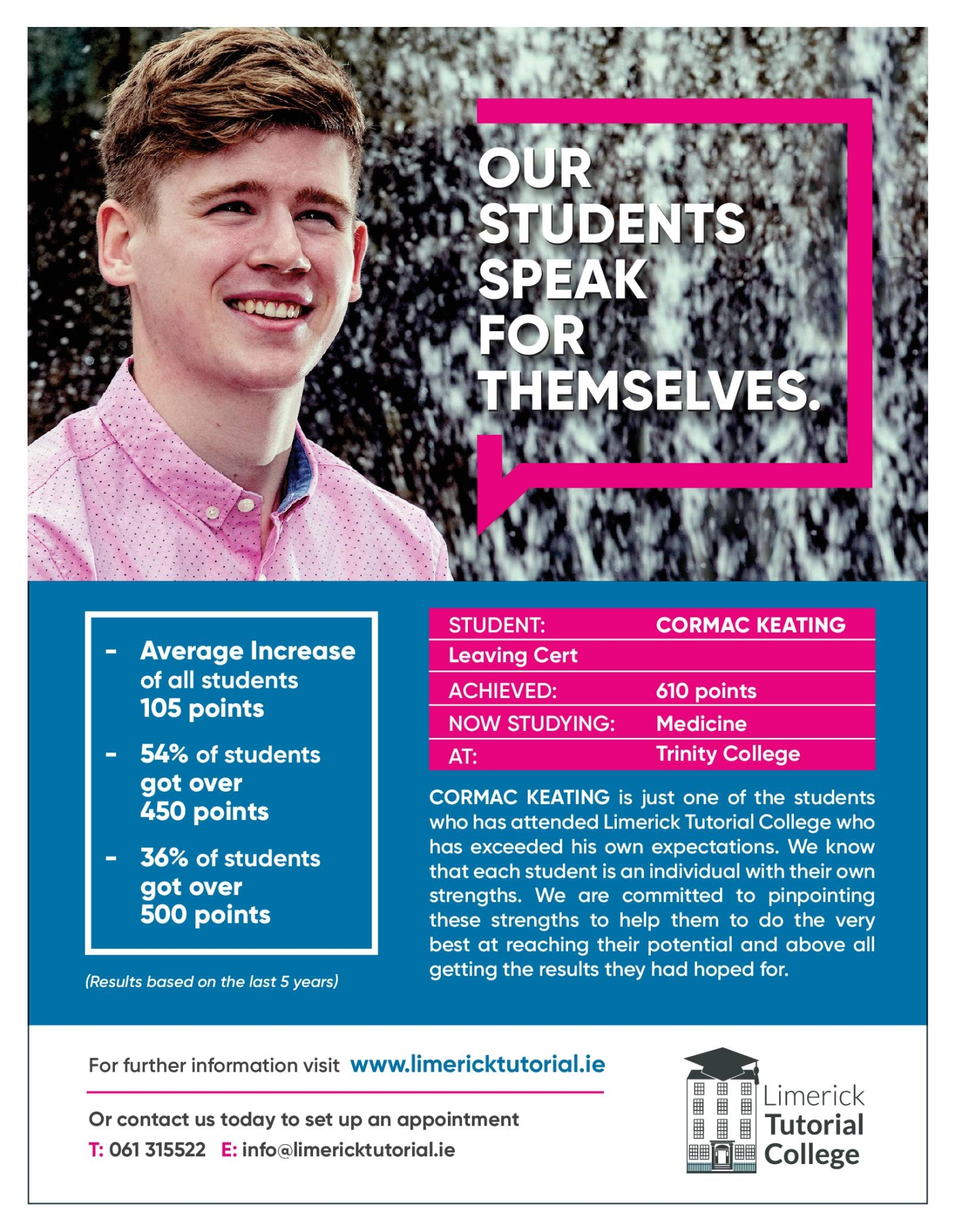 For David O’Brien, Tournafulla, who admitted to being a bit nervous, it was a case of “getting it over and done with”.

One student at Ardscoil Ris, Will O'Callaghan, scored a perfect seven H1s and a whopping 625 points.

"We are delighted with our students and they all seem extremely happy," said deputy principal Nicola Cunningham, saying that seven of her students received 600 points and that it was a "proud day for the students".

She said they were a "very dedicated year and super students", and praised all staff and parents.

She said that Will has been an "extra dedicated student since first year" and has "delved into all aspects of school life".

Will captained the school's Senior Cup team and has been "part of the spiritual side of the school", she said.

"He is a very happy student who gets on with his peers and teachers."

Her advice for aspiring top-scorers? "It starts from the beginning."

Students at Limerick Tutorial College in the city centre were also elated with their results.

Alex Nugent, Ballyneety said he was "very happy" with his results.

"I’m hoping to go to Cork and study medicine. I was really nervous, going in, so nervous.

Emer Lenihan, from Castletroy, said: “I’m so happy with my results, I think I have enough for my course, so I’m just really happy. I was so nervous about going in, I predicted stuff but you always have some surprises. I’m very happy. I hope to go to UCC to do Pharmacy."

Brian O’Donnell from Castletroy said: “It was good, I’m happy. I was so nervous about going in this morning, I have never been so nervous in my life. I’m hoping to go to UCC.”

Another student to get a perfect score was Gaelcholaiste Luimnigh student David Kennedy, who earned six H1s.

Donncha O'Treasaigh, who served as principal since 2006 and is now with the Limerick and Clare Training and Education Board, said he was "thrilled with everyone in the school".

Two thirds of the students received more than 400 points, he said.

"It's down to very hard work from students who use a high degree of technology to make subjects interesting and relevant," he said.