As the graduate show beckons, 12 artists talk about their creative influences

ALMOST 200 Limerick School of Art and Design graduates are ready to showcase their work at the annual graduate show – themed ‘be.cause’.

The long-running show has been attracting thousands of visitors for a week every year since the college was founded in 1852.

The show will be officially opened by John Concannon – Director of Creative Ireland – at 3pm on June 10 on the Clare Street campus. The works come from a broad range of artistic disciplines; painting, photography and lens based media, printmaking and contemporary practice, sculpture and combined media, animations and motion design, ceramic design, fashion design, visual communication and - for the first time ever - fashion knitwear and textiles.

“We are excited about it. Every year, we are always amazed at the creativity and the individual stories and the issues that the students make work out of,” said head of school Mike Fitzpatrick.

“We have a great diversity of students, in terms of age and experience. Some students come to LSAD maturely, maybe after a career in another field, and that brings a richness to the place. The ambition we would all have is that many of our fantastic students would remain or return to live in the Limerick city region,” he said, adding that the hope is always to attract more international students.

“There’s a nice family atmosphere here, even though we have grown by 40 percent over the past five years. We have over 1,000 students now, including almost 200 in Clonmel,” he added. 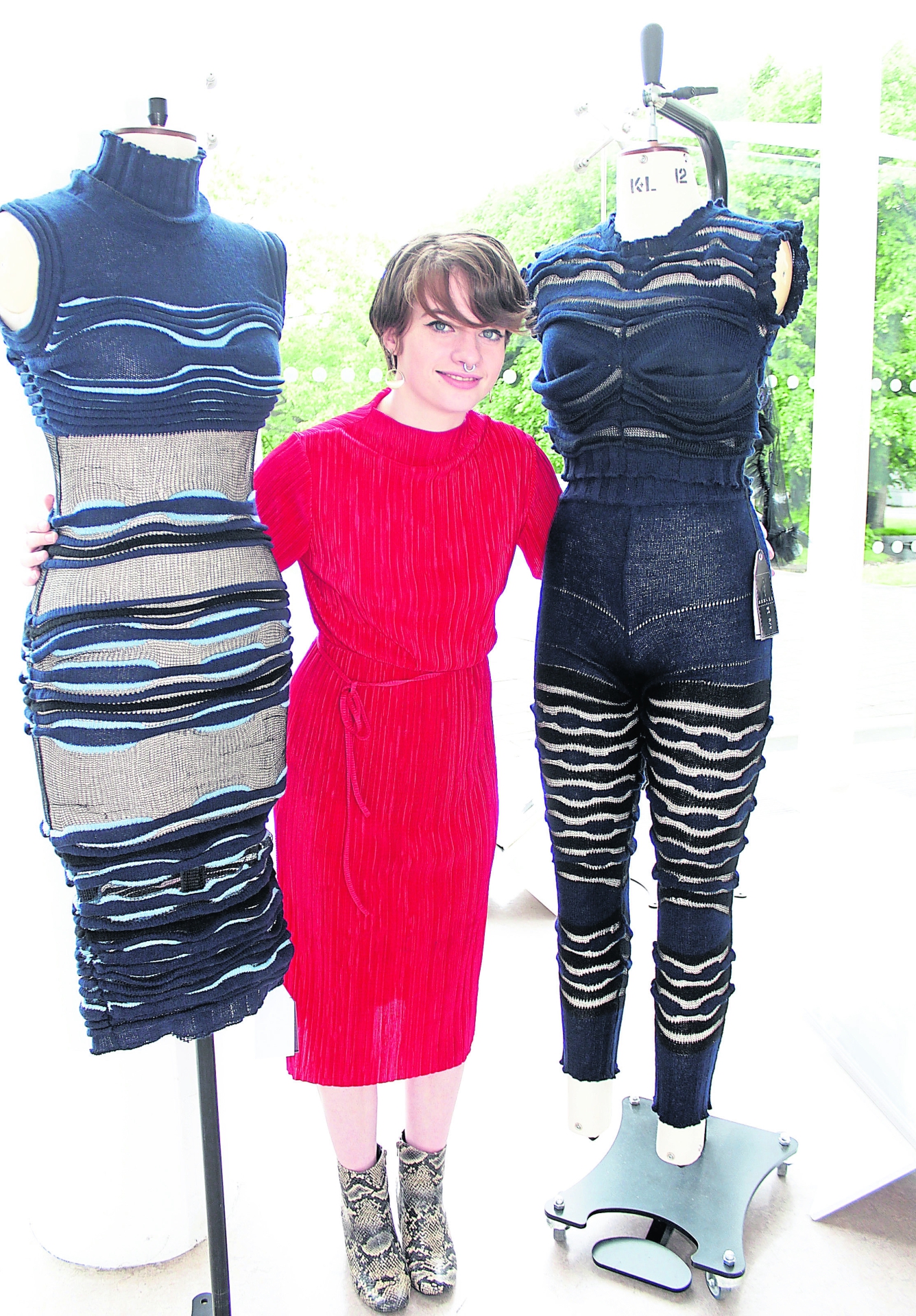 Fiona Byrne is a new graduate of the Fashion, Knitwear and Textile degree. Her cool-toned knits in the collection ‘XXXII’ are based on fictional cityscapes, architecture in anime and female representation. Using mesh panels on the garments, Fiona said that she “wanted it to look sexual, but the gaze to still be controlled by the viewer.” The blue, bubbling shapes in her collection are heavily inspired by the cool, often round and glassy texture of modern city buildings. Using methods like tucking, partial tucking and partial knitting, the soft, clingy fabrics are form-fitting, almost armour-like. “I wanted a sports and futuristic element, while the cold colours are sterile and architectural,” said Fiona. Women from around the college were used as models in the college’s first ever knitwear show last month. Fiona is one of the first ever group of BA in Fashion Knitwear and Textile Design graduates, after the course was introduced four years ago. 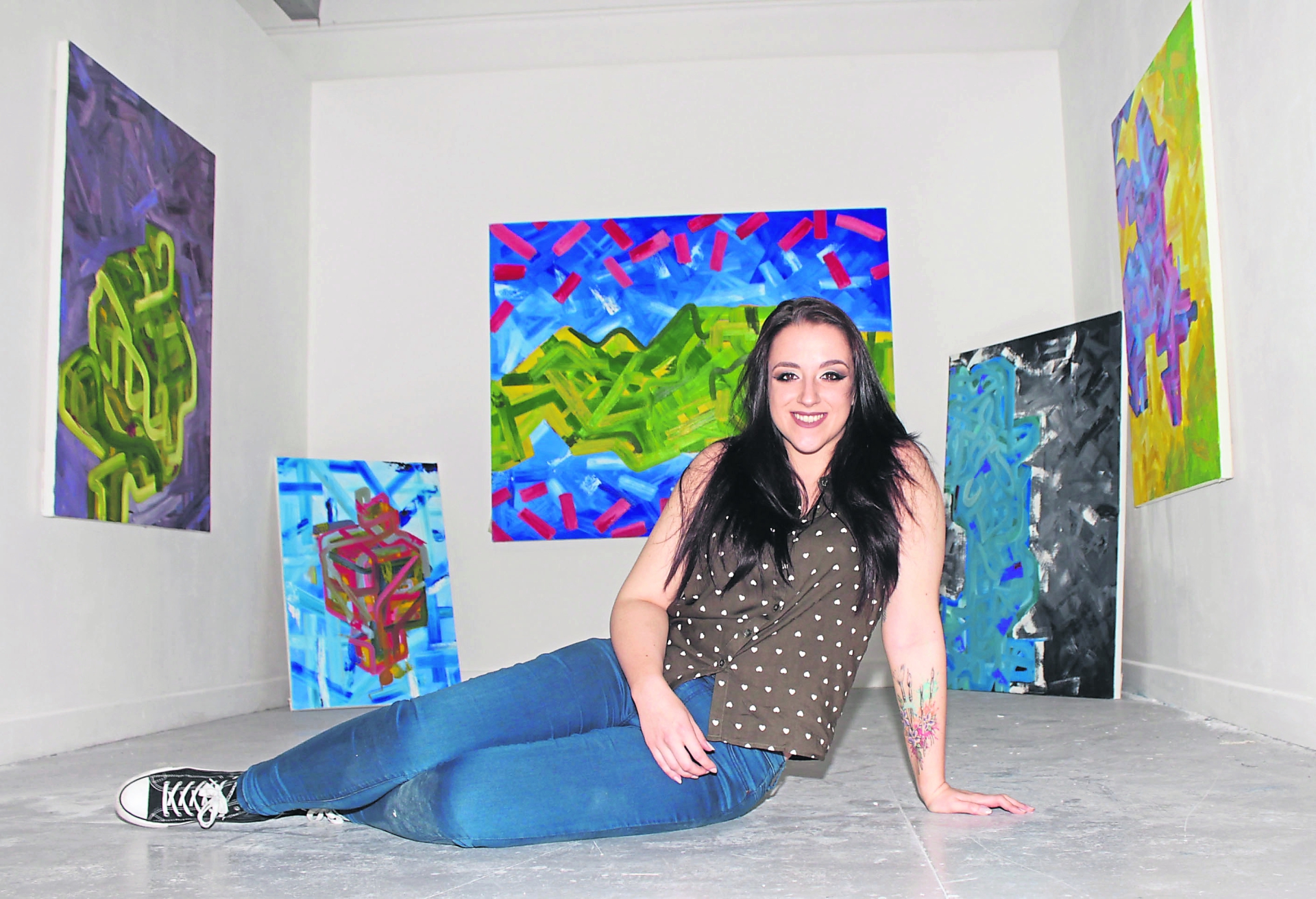 Vicky Enright, a Painting graduate from Sexton Street, was inspired by brutalist architecture in her bright, vivid works. “I turned it into one big, colourful façade,” she said. Some of the oil on canvas paintings took a long time to create, as she painted wet on wet, building layers of colour. And how did she enjoy her four years at LSAD? “It’s been really good. I’ve always wanted to do it,” she said. Like most of the work, Vicky’s paintings will be up for sale at the graduate show. “I have no room for them all at home!” 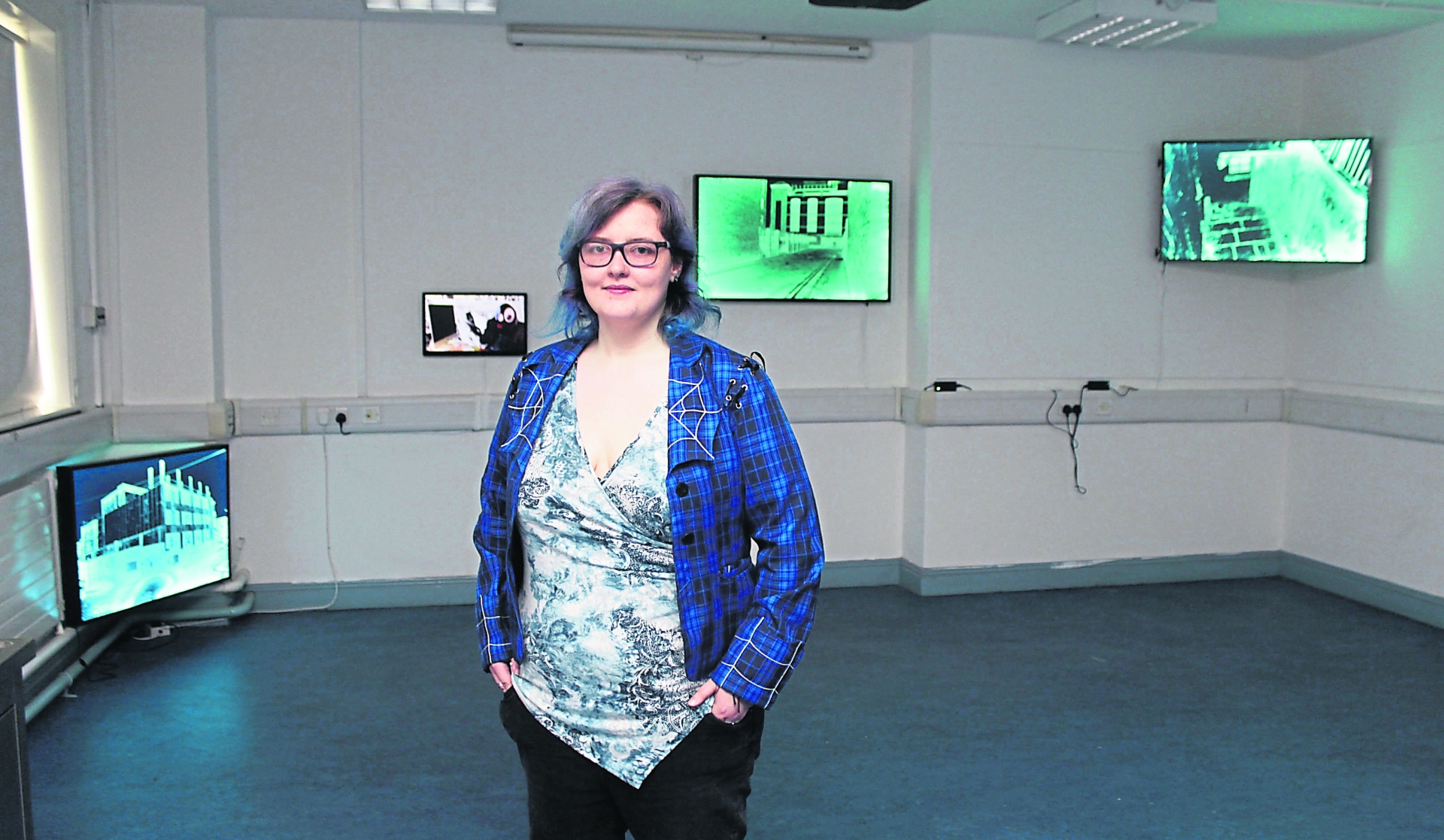 Michelle Ryan is one of the second round of graduates ever from the Photography and Lens Based Media course. “I’m interested in elements of storytelling.. The ‘yarn’, and fake news,” she said. Originally from Limerick but now living in O’Briensbridge, Michelle said that she found herself baffled when reading information online about allergies. “I found myself very sceptical about the advice I was reading,” she said. “With these articles, there’s always a discussion under it – celebrities, politicians, religious people…” The project, an installation using screens with video combined with jarring audio made from ringtones, has panicking puppets and online comments, which spiral downwards in the way that online arguments often do. Godwin’s law – an Internet adage which asserts that the longer an online discussion becomes, a comparison involving Hitler is almost certain – was a big influence in the work. Some of her materials were sponsored by Trotec Laser. “I used sock puppets because I have an irrational fear of them. The fear of reading stuff about my health and not trusting it is personified in a sock puppet.”

Imelda Hoare - Keep Her In By The Bank 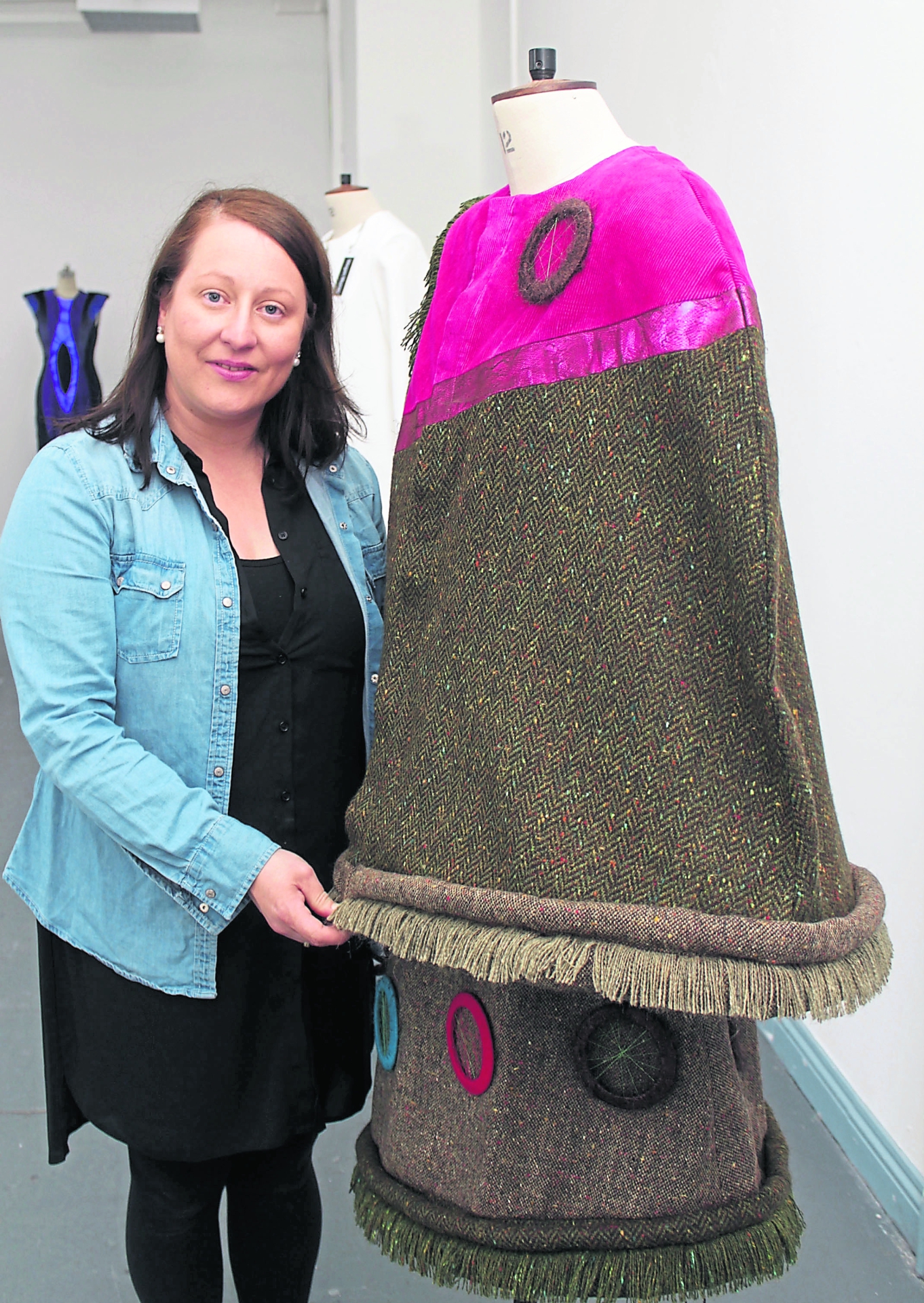 Imelda Hoare’s collection was inspired by her father’s family tradition of boating. The Kilkenny Fashion Design graduate was enthralled by stories from the family’s days of working and living on a barge between the 30s and the 50s. “My collection seeks to capture the rigid structure and frame of the barge itself,” said Imelda. Using wool and corduroy, symbolic of the working environment of the time, she gradually introduces sacks as her collection unfolds. 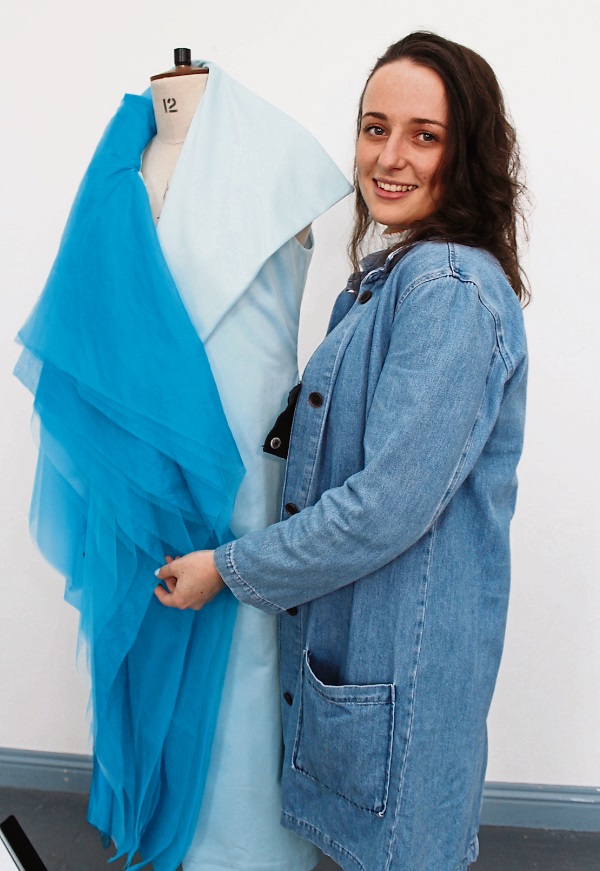 Louise Lawlor’s Labyrinth collection is inspired by “sacred geometries and our deep connection to the natural world”. The Ballybunion designer took cues from the unravelling of spiral and helix forms, and the opening and closing movements of a blossoming flower. Her colours, inspired by the transient nature of darkness and daylight and their effects on flowers, are mostly white, blue and yellow. “I used a mix of cotton organdies, cottons, neoprene and netting layered with mesh,” she said. 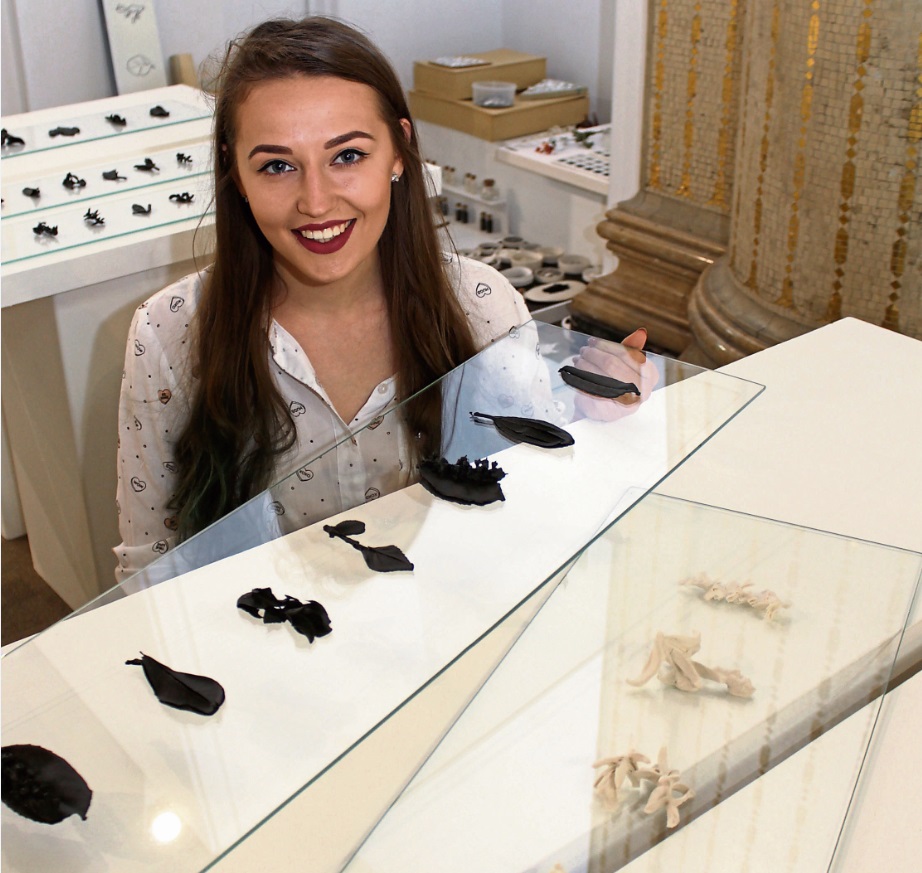 Laura Matikaite, a Ceramics student from the Midlands but with Lithuanian origins, is focused on small, natural things. She collected her objects around Limerick city, natural things that somehow ended up in an urban environment. “By exploring my urban environment I became drawn to pockets of nature. I hope to draw the viewer’s attention by encapsulating the fragility of nature which can easily be overlooked,” said Laura. Each piece is cast from one of the tiny natural things she found. Many go through several rounds of the process, and some of the natural objects are burned out of the shell. Referring to them as ‘keepsakes’, she points out that each object is a piece of Limerick. Having established a base in Limerick over the last four years while studying at LSAD, the keepsakes represent a memory of the last four years. “The natural objects are immortalised in ceramics, enshrining these collections into a physical visual diary,” she said. 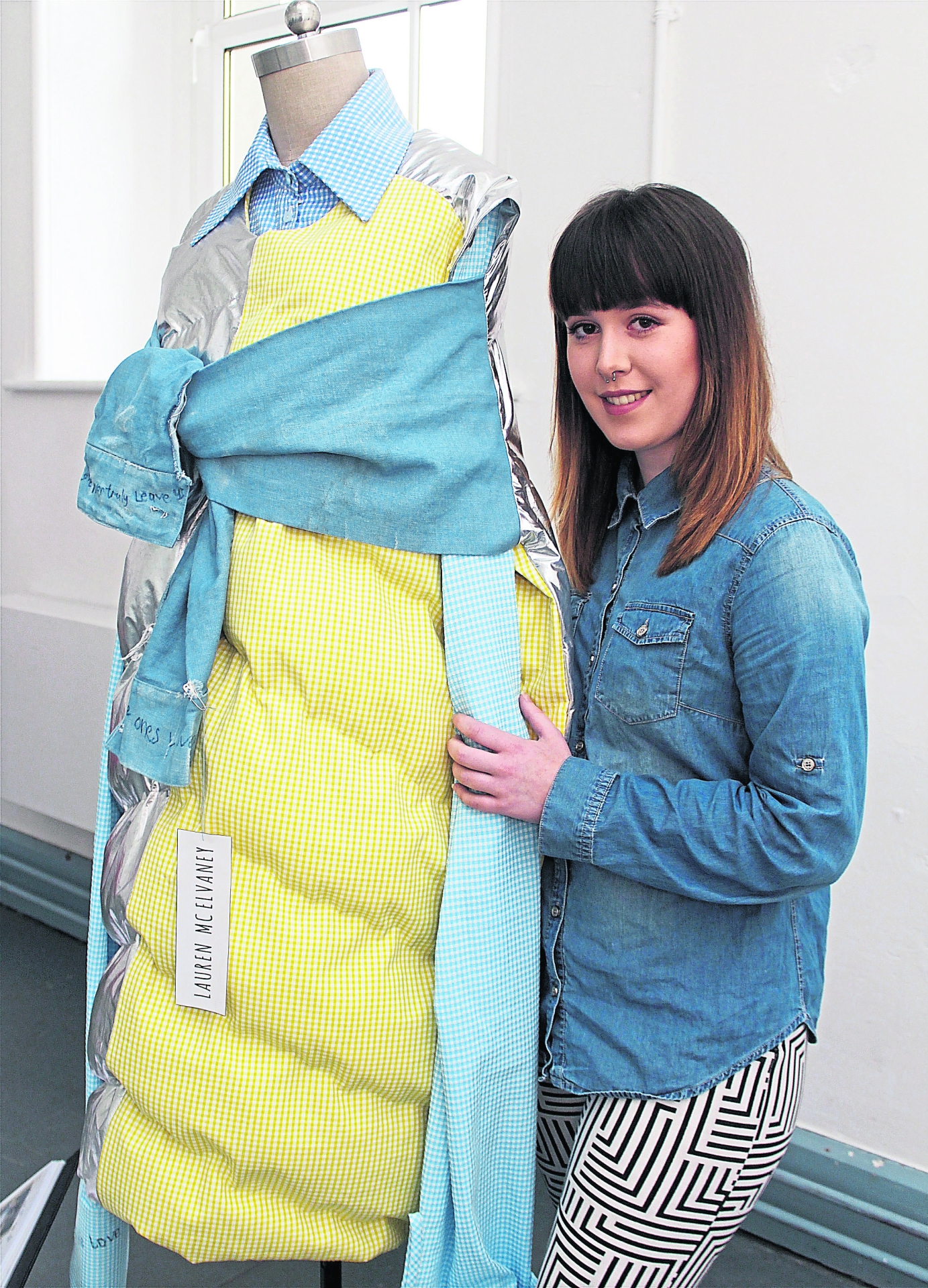 Monaghan native Lauren McElvaney’s collection is inspired by the fading memories of her father, who passed away when Lauren was six. “It is a childlike response to holding on to the past and trying not to forget,” she said. “I played with the idea of dressing up in my dad’s clothes as a design point, when creating the oversized spec. Wadding and padding creates a sense of engulfing myself in the memories when combined with the sleeves creating a hug-like effect.”

Alice Greene - Not Another Musical Outbreak! 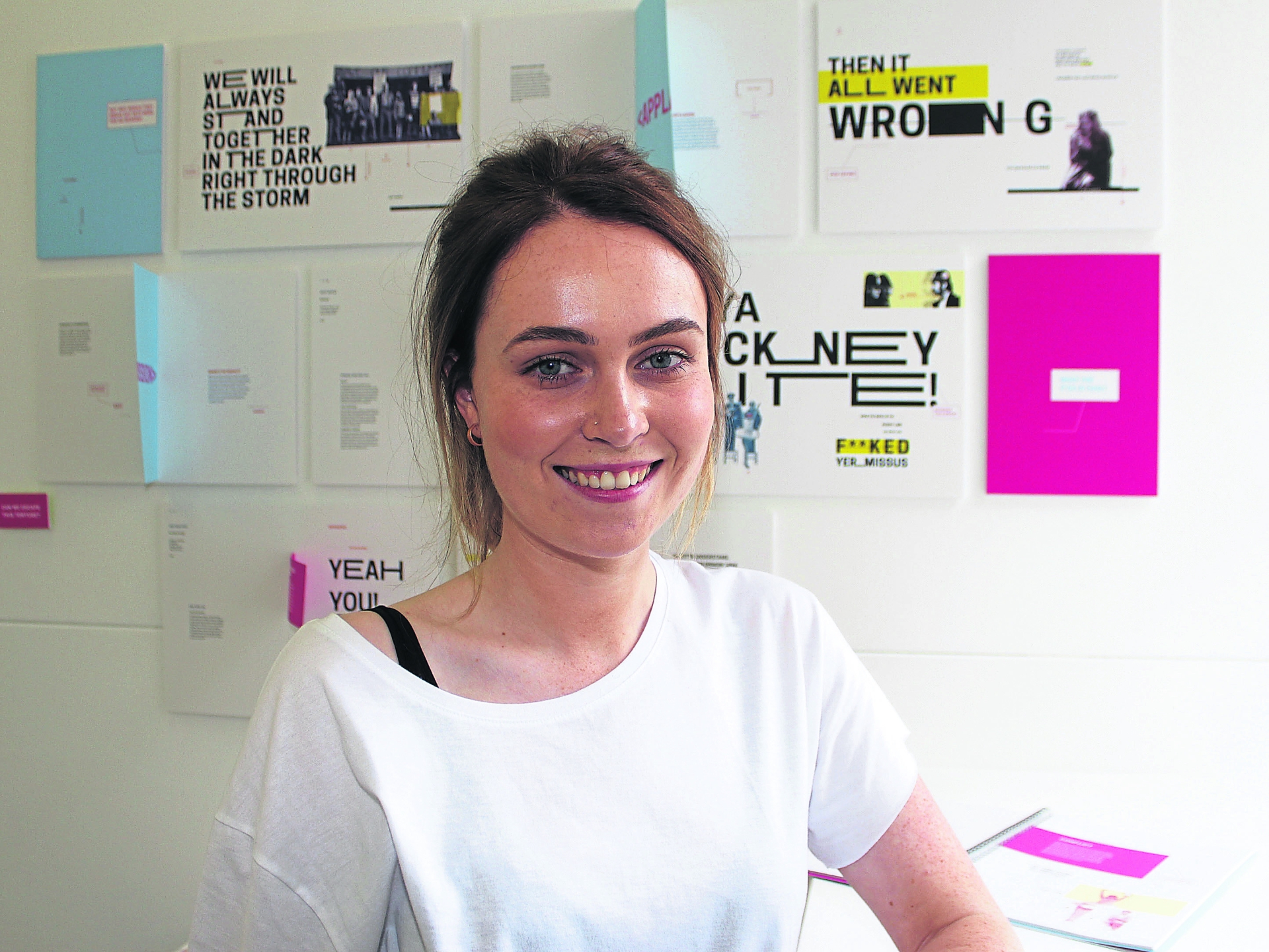 Alice Greene, a Visual Communications student from Leitrim, worked on the topic of musicals for her project. Not Another Musical Outbreak is an editorial book - “I deal with four different types of musicals - I want to show people that underneath that whole sheen and folly that people think musicals are, there are cultural topics. Throughout the book, there is a second voice from someone who hates musicals – they’ll say, ‘why the hell are they breaking into song?’, and I show that, in the song, they might be talking about something like racism. It’s to show the underlying meanings of musicals,” she said. 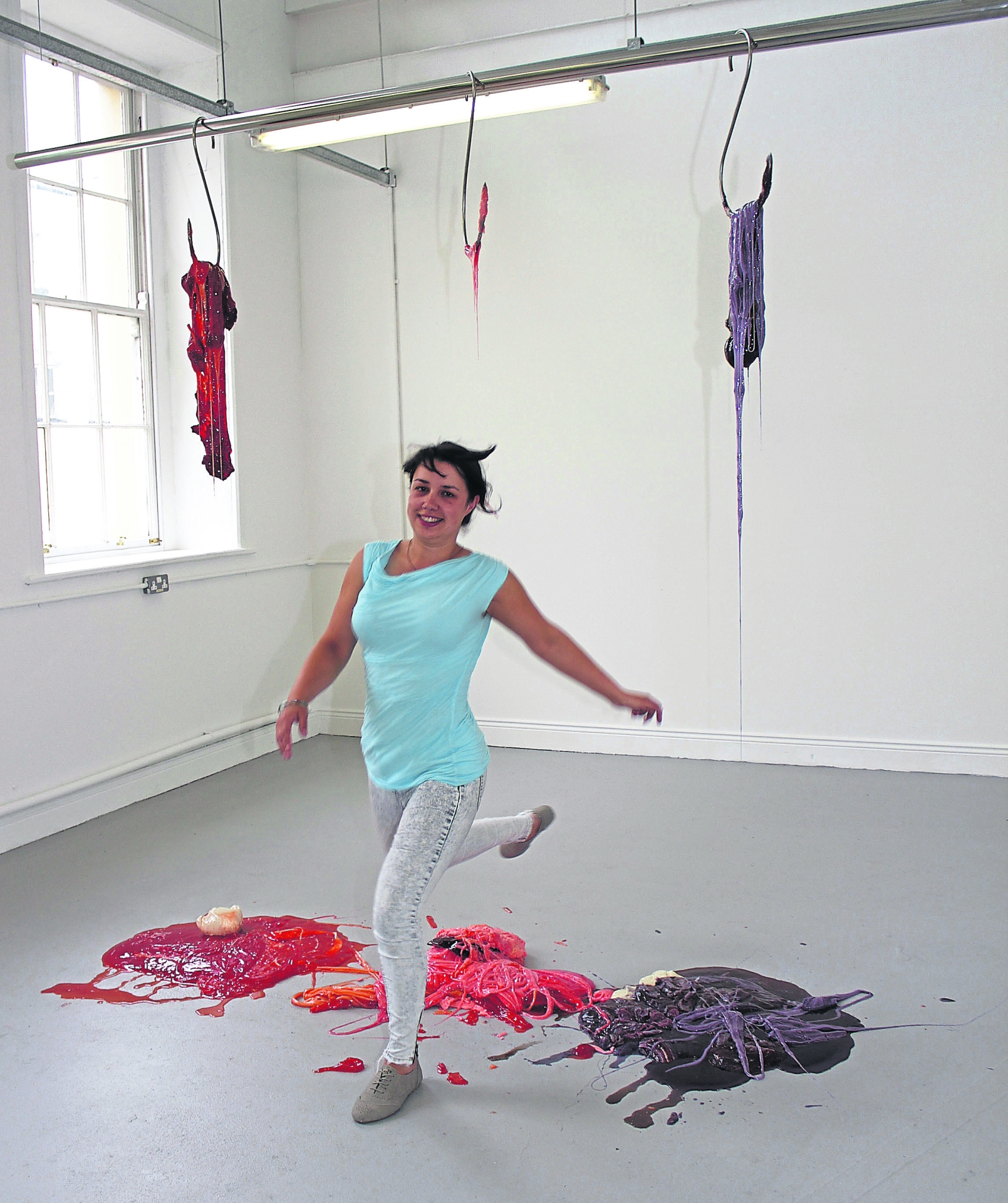 Emma Osterloh, a Sculpture student originally from South Africa but living in Limerick, wanted viewers to think about sugar. Her evocative project involves giant, sinewy lumps of candied sugar hanging from hooks. “My main material at the moment is sugar, focusing on sugar consumption, in both my personal life and in today’s world. I use the same techniques as sweet and toffee-making,” said Emma. The lumps and strands will keep moving down slowly, and she will have to keep touching it up until and during the show. “One of these has moved 25 centimetres in the last 36 hours. The big thing in my work is the ooze and the goo, the mess that’s left behind. My work will disintegrate and disappear,” she added. 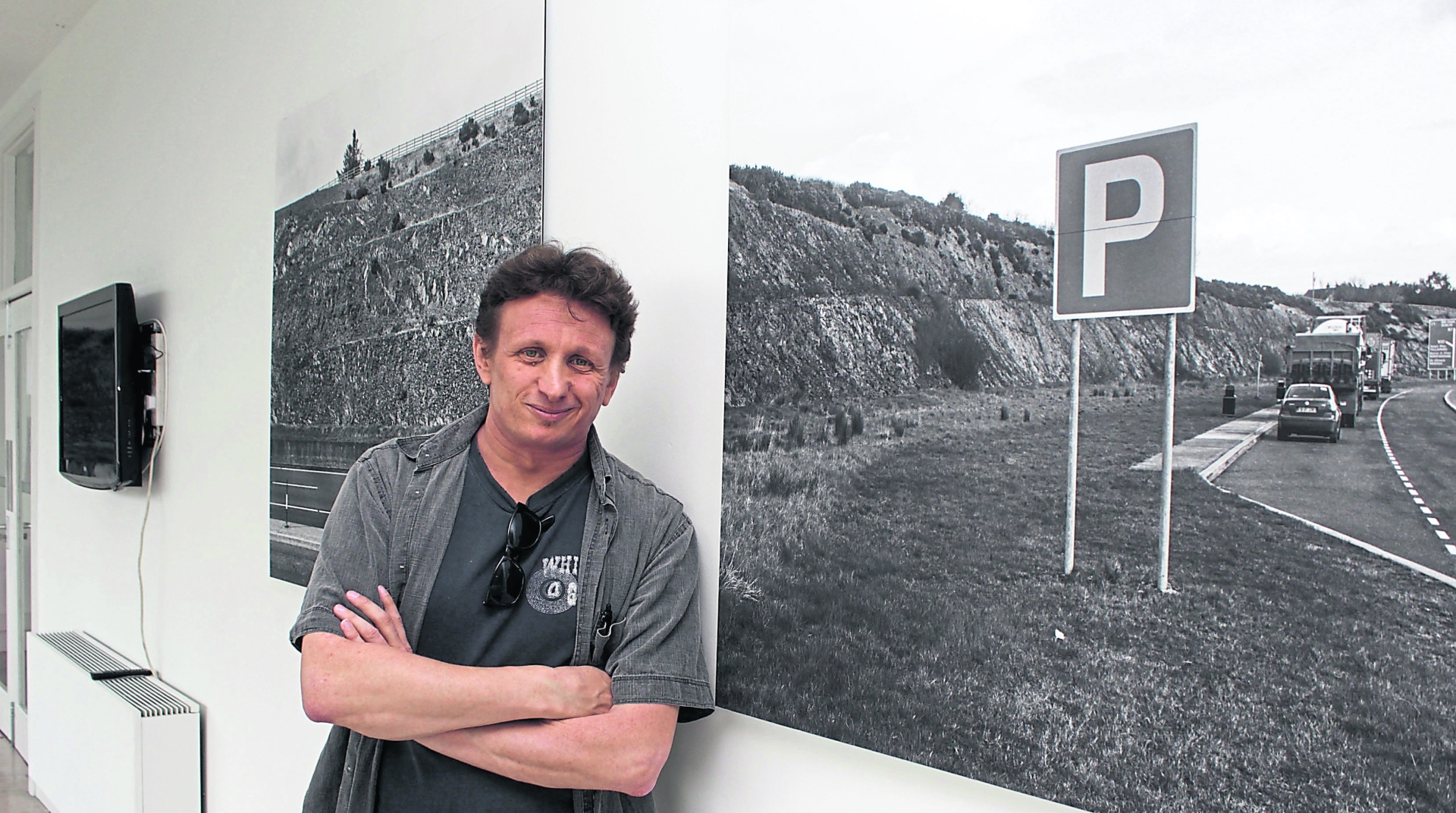 Tallaght native Andrew O’Toole focused on the concept of space and time for his Photography project. His gallery space is set up like a museum, video playing screens breaking up the still photographs. Pictures of the terrain on the side of the M7 sit alongside a screen playing a video of Andrew pushing a car through a rest area at the motorway’s edge. “I’m dealing with the passing of time. The intention is to inform my audience initially through photography about environmental changes caused by human activity and economy,” he said, pointing out the changes in the terrain as a result of the motorway in the photographs, which were taken on film. “Scientists and geologists will talk about statistics, but they are still trying to figure out the effect on the environment caused by late capitalism. You can’t grasp or appreciate the damage being done to the planet until you witness it,” added Andrew. 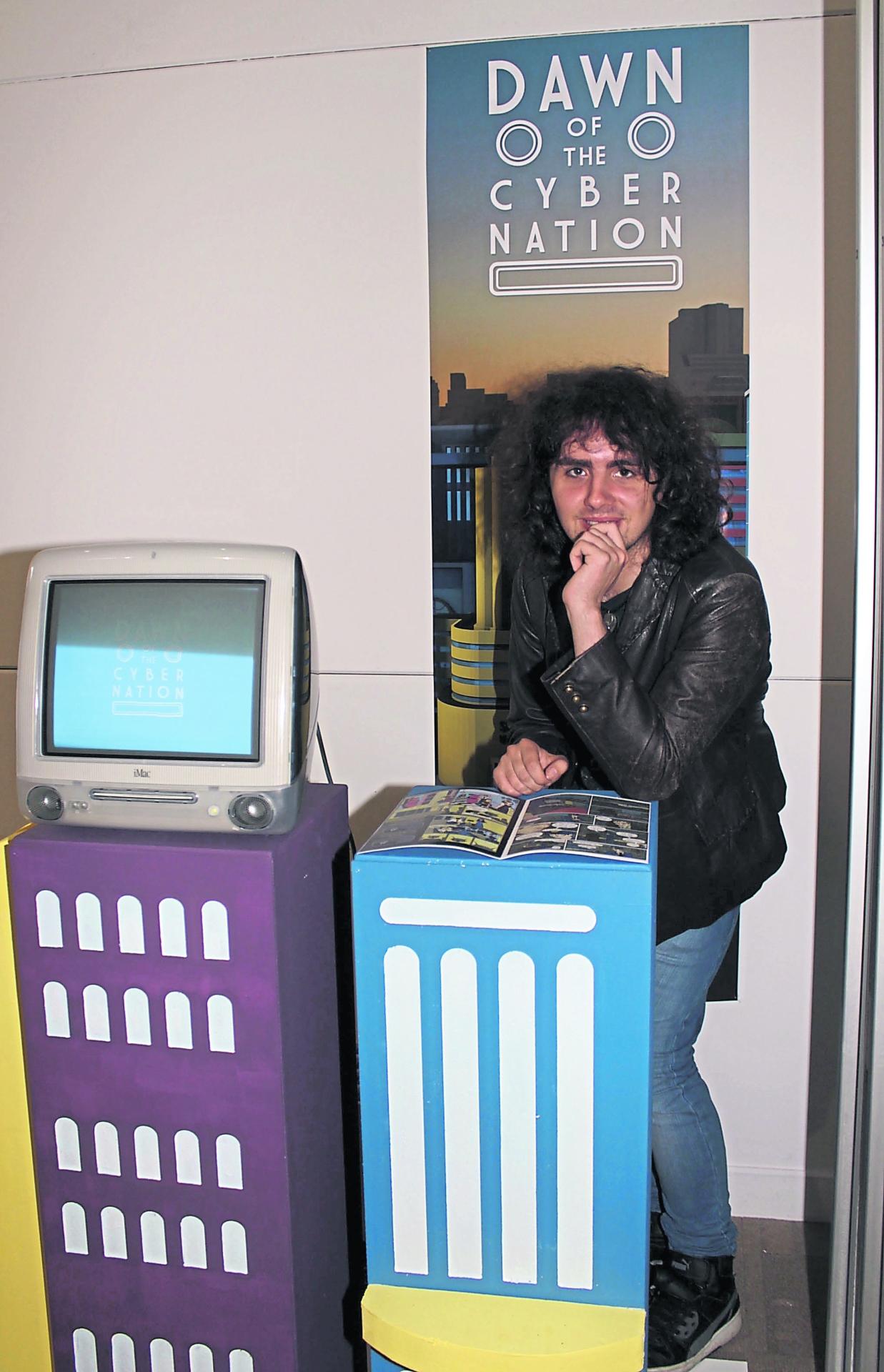 Cormac Finan, from Sligo, is one of the newest graduates of Animation and Motion Design. His project, a comic book and accompanying animation, is a retro-futuristic sci-fi story. “It’s set in 1950s Art Deco, about the last man working in the post office, which is being taken over by machines. When I originally started, I was looking at how we take in comics versus animation, there’s often a mix up between the two. I’d like to work in comics, hopefully,” he said, of an industry bubbling in regional Ireland. Cormac mentions comic companies in Limerick, Clare and Cork, before adding, “it’s a nice industry in Ireland at the moment”. 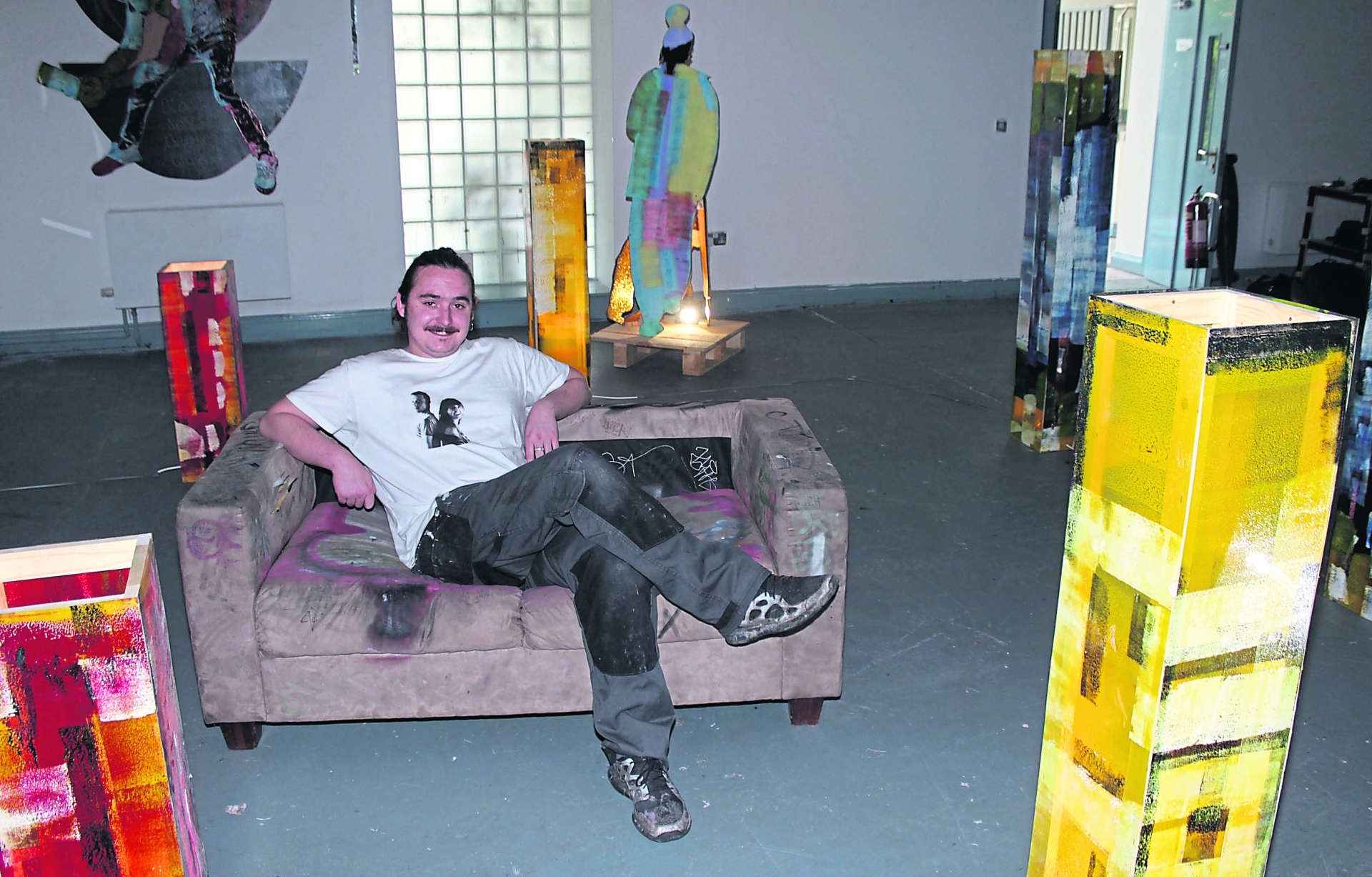 Adare native James Canty’s Printmaking project brings the viewer into the reckless abandon of a wild and youthful party, the exhibition space hinting at the industrial feel of a student flat. Pulling strong influences from punk, rave and 60s psychedelia, “it’s based on my experience in the art college, the party experience and the party lifestyle”, according to James. “The party scene in the art college is an education, full of creatively-minded people. I view the art college as a subculture,” he added.