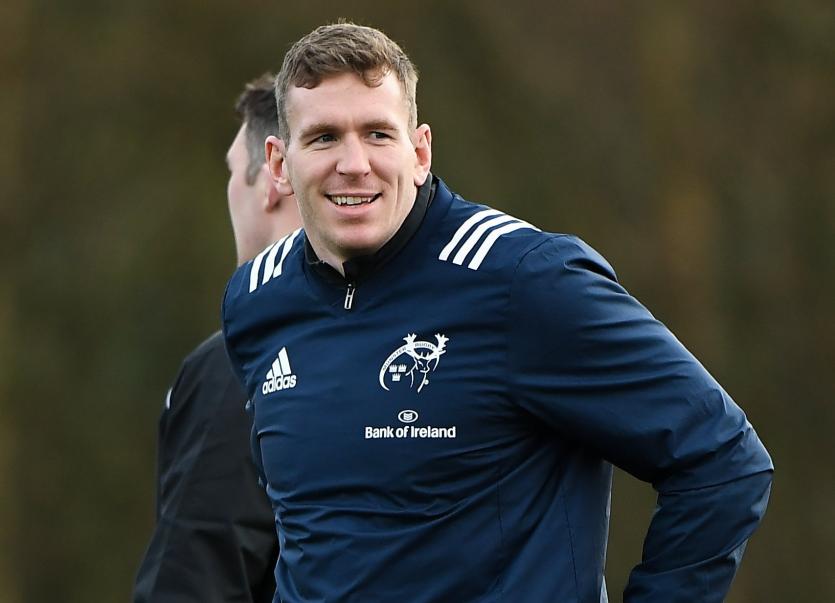 MUNSTER centre Chris Farrell says Racing 92s backs and attack coach Mike Prendergast helped him improve ‘a lot as a player’ during their time working together in France.
Limerick man Prendergast was a key member for the Grenoble backroom team during the time that Farrell was playing Top 14 rugby with Grenoble.
Prendergast and Farrell will be in opposing camps this Sunday when the French giants Racing 92 welcome Munster to Paris for a crucial Round 5 Champions Cup fixture.
Looking ahead to the game, Ireland international centre Farrell says he feels a lot of gratitude towards former Munster scrum-half Prendergast for helping him develop into the player he is today.
“I got on really well with Mike at Grenoble,” Chris Farrell explained.
“He was unbelievable for us at Grenoble, with taking our backs and our attack to a really good level.
“Mike and I would have been very close. I worked really closely with him and he would have improved me as a player a lot as well, so I feel awful lot of gratitude to him.
“I speak to Mike regularly. I haven’t spoken to him since the game with Racing in Thomond Park, but over the past number of years I would have been in touch with him a lot and kept an eye on how he is going in France and likewise he gets on to me when he feels the need to.
“I have a really good relationship with him and he is going really well in France, it’s great to see.”
Munster will need to defeat Racing 92 in the French capital this weekend in order to keep their hopes of progressing to the quarter-finals once again alive ahead of their final pool game at home to Ospreys on Sunday week.
This weekend’s game will be the first time in a number of week’s that the likely selected Munster XV will play together as a unit.
Farrell says that having a nine day turnaround from the Pro14 clash with Ulster is a benefit in ensuring the Munster side hit the ground running this weekend.
“It obviously helps this week that we have a nine day turnaround since Ulster.
“We have had one or two days to nail things down detail wise. We had a walk through on Monday.
“Because we have the extra day we could spend a little bit more time on indoor stuff, so it does help.
“Then it’s really just a case of looking after yourself until the weekend.
“If we get the detail done early in the week and we have the opportunity this week, then come Friday, Saturday we can start thinking about what it is going to take physically, what its going to take mentally to get right for the game.
“No, we’ll be ok, hopefully.”
Farrell says he is excited by the challenge that lies ahead in Sunday’s ‘do-or-die’ clash with Racing 92 who secured a thrilling draw at Thomond Park in Round 2 of the competition in November.
“Last year we were in a similar position. We only had one extra point at this stage last year because of a losing bonus point, but it was the same story, do-or-die.
“That in itself is exciting and we are quite good at dealing with that sort of pressure, I feel, and I think because of the nine-day turnaround we can put what has happened over the last two weeks behind us.
“We obviously addressed it on Tuesday and addressed it over the weekend individually ourselves, but the beauty is that we have now a few more days before we get cracking into another team and things turn around pretty quickly in this game.
“Racing were really clinical when they came to Thomond Park. We had to work for our tries and I don’t feel like we made them work and that was the big takeaway from us on that week.
“We need to tighten up a few small things for this weekend.”
For more see #LLSport